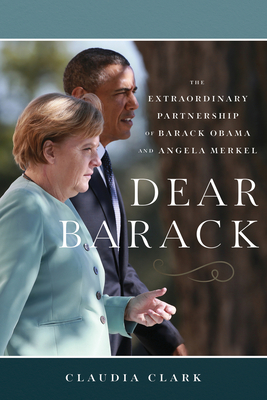 One of the great political friendships of the modern world, as told through key moments that shaped the twenty-first century

Today, we know US President Barack Obama and German Chancellor Angela Merkel as two of the world’s most influential leaders, together at the center of some of the biggest controversies and most impressive advancements of our time. But while their friendship has been the subject of both scrutiny and admiration, few know the full story.

Taking office at the height of the 2008 global recession, Obama was keenly aware of the fractured relationship between the US and Europe. And for her part, Merkel was suspicious of the charismatic newcomer who had captivated her country.

Faced with the challenges of globalization, the two often clashed over policy, but—as the first Black president and first female chancellor—they shared a belief that democracy could uplift the world. United by this conviction, they would forge a complicated but inspiring partnership.

Dear Barack is a thoroughly researched document of the parallel trajectories that led to Obama and Merkel meeting on the world stage and the trials, both personal and political, that they confronted in office. At times in the leaders’ own words, the book details such events as Merkel’s historic acceptance of the Presidential Medal of Freedom, Russia’s annexation of Crimea, and the 2013 NSA spying scandal, demonstrating the highs and lows of this extraordinary alliance.

A story of camaraderie at a global scale, Dear Barack shows that it is possible for political adversaries to establish bonds of respect—and even friendship—in the service of the free world.

Claudia Clark is an author, speaker, and activist focused on social justice and democracy. In 2017, Clark and her husband moved from California to Germany, where she served as the national Get Out the Vote (GOTV) coordinator for the Democrats Abroad Germany chapter in preparation for the 2020 presidential election. Clark has several advanced degrees, with a focus on social work, women’s history, and labor. She currently lives in Berlin, where she is conducting research for her next book about the rise of the alt-right in Europe.

"Technology has linked the planet, and the need for responsible, committed, and informed leaders has never been greater. Dear Barack reflects upon this urgency as Clark brings to life the correspondences, meetings, and goals shared between two great world leaders." —Tom Cochran, Obama White House & State Department Technology Advisor

"Clark’s book retells a fascinating and necessary chapter of U.S. relations with Germany. Dear Barack is a reminder that the U.S. can always return to the era of Obama and Merkel’s companionship, and that the world would be a better place if it did." —Shari Temple, Democrats Abroad Germany Voting Representative and 2008 DNC Obama delegate

"These past few years have left me searching for hope, and I’m happy to find it in Dear Barack...Clark exudes expertise, warmth, and a commitment to the subject matter." —Judy Pipkin, Director of Community Services and Voter Registration, Santa Clara County Democratic Party

"Clark traces the friendship of Obama and Merkel in meticulous detail with charming anecdotes and expertly places their bond within the historical contexts of other world leaders’ relationships...A delightful, well-researched account of two leaders’ unlikely friendship." —Kirkus Reviews