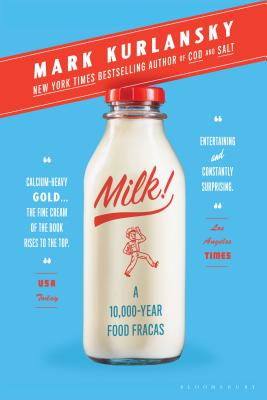 Mark Kurlansky's first global food history since the bestselling Cod and Salt; the fascinating cultural, economic, and culinary story of milk and all things dairy--with recipes throughout.

According to the Greek creation myth, we are so much spilt milk; a splatter of the goddess Hera's breast milk became our galaxy, the Milky Way. But while mother's milk may be the essence of nourishment, it is the milk of other mammals that humans have cultivated ever since the domestication of animals more than 10,000 years ago, originally as a source of cheese, yogurt, kefir, and all manner of edible innovations that rendered lactose digestible, and then, when genetic mutation made some of us lactose-tolerant, milk itself.

Before the industrial revolution, it was common for families to keep dairy cows and produce their own milk. But during the nineteenth century, mass production and urbanization made milk safety a leading issue of the day, with milk-borne illnesses a common cause of death. Pasteurization slowly became a legislative matter. And today, milk is a test case in the most pressing issues in food politics, from industrial farming and animal rights to GMOs, the locavore movement, and advocates for raw milk, who controversially reject pasteurization.

Profoundly intertwined with human civilization, milk has a compelling and a surprisingly global story to tell, and historian Mark Kurlansky is the perfect person to tell it. Tracing the liquid's diverse history from antiquity to the present, he details its curious and crucial role in cultural evolution, religion, nutrition, politics, and economics.

Mark Kurlansky is the New York Times bestselling author of Milk!, Havana, Paper, The Big Oyster, 1968, Salt, The Basque History of the World, Cod, and Salmon, among other titles. He has received the Dayton Literary Peace Prize, Bon Appétit's Food Writer of the Year Award, the James Beard Award, and the Glenfiddich Award. He lives in New York City. www.markkurlansky.com

“Milk! A 10,000-Year Food Fracas is a feat of investigation, compilation and organization . . . Altogether a complex and rich survey, “Milk!” is a book well worth nursing.” —Wall Street Journal

“The sort of book that Proust might have written had Proust become distracted by the madeleine . . . you step away from this book with a new vantage on history, a working knowledge of exotic milk and cheese, acceptance of your mom, a sense of what makes Mark Kurlansky tick and a weird craving for buffalo mozzarella.” —Editors' Choice, New York Times Book Review

“[A] readable and almost unreasonably fascinating book.” —The Times of London

“Cod, salt, paper, oysters, 1968, and Havana-Kurlansky always picks a singular subject, then runs with it as he provides historical and cultural context. Here he examines our relationship to milk since the domestication of animals more than 10,000 years ago. That relationship shifted with the Industrial Revolution, which meant out with the family cow and in with pasteurization and, eventually, food fights over industrial farming, animal rights, and GMOs. Pour a glass and get out the cookies before reading.” —Library Journal's Nonfiction Picks, May 2018

“The author of Salt (2002) and Cod (1997) tackles another staple food in this chatty history of milk and
some of the many products made from it . . . Kurlansky's wide-ranging curiosity makes a familiar topic seem exotic.” —Booklist

“A wide-ranging history of a surprisingly controversial form of nourishment . . . Chock-full of fascinating details.” —Kirkus

“A fascinating and comprehensive book that will keep readers engaged and entertained . . . Will appeal to both foodies and readers of world history.” —Library Journal

“Fascinating . . . Every chapter of Milk! entrances with I-did-not-know-that facts and observations.” —BookPage

“As with Mark Kurlansky's Cod and Salt, I wish I had written Milk! Never would I have thought that so elementary a liquid food had such an intriguing history, one that includes science, politics, economics, and gourmandize. A great read on a great subject!” —Mimi Sheraton

“Mark Kurlansky, the best-selling author of Cod and Salt, traces the 10,000-year-old cultural, economic, and culinary trajectory of this dietary staple, packing in dairy-centric recipes both ancient and modern.” —Modern Farmer, "Seven of the Season's Best New Books"

“Calcium-heavy gold . . . the fine cream of the book rises to the top.” —USA Today

“A prolific and spirited explicator of the the world, Kurlansky has written on subjects as varied as 1968, Cuba, and European Jewry, but his sweet spot is literature on single forms of nutrition and sustenance, with books such as Cod: A Biography of the Fish that Changed the World and Salt: A World History. He now turns his attention to the mother of all subjects--milk--which he sees as the most argued-over food of the past 10,000 years. In this entertaining and constantly surprising book, he chronicles debates and disputes over milk (breast or bottle, pasteurized or homogenized, genetically modified or raw) and even finds that fierce disagreements over wet nurses involved not whether to use one, but whether brunettes or blondes were better.” —The National Book Review, "Five Hot Books"

“Food historian Mark Kurlansky is famous for his deep dives on singular subjects, which range from salt to cod to oysters, and his latest work is everything one expects from this obsessive researcher. Milk! delves into the world's most complex cultural, economic and culinary stories centered around milk, from Greek creation myths to modern pasteurization.” —Smithsonian Magazine, 10 Best Books about Food of the Year

“Something to enjoy with a cold class of (what else) milk and a warm cookie.” —Popular Science

“Best-selling author Mark Kurlansky follows up Cod (1997) and Salt (2002) with another zestful exploration of one foodstuff - milk - through history and a range of lenses . . . Kurlansky keeps up a cracking pace on a tour that covers classical geographer Strabo griping about the Celts' milk consumption; the disease-generating dairies of nineteenth-century New York City; lactose intolerance in China; and 126 recipes for everything from ghee to syllabub.” —Nature

“From the first page of this book, you'll be fascinated by how much milk, and its relatives like cheese, whey, and ice cream, have infiltrated our lives over thousands of years. If you've ever found yourself in a debate about what milk is the best milk--goat, cow, human?!--this book will equip you with all the random tidbits to strengthen your rebuttal.” —Bon Appétit, "8 Non-Cookbook Food Books to Read This Summer"

“Fascinating stuff . . . [Kurlansky] has a keen eye for odd facts and natural detail.” —The Wall Street Journal on THE BIG OYSTER

“Magnificent . . . a towering accomplishment.” —Associated Press on THE BIG OYSTER

“Every once in a while a writer of particular skill takes a fresh, seemingly improbable idea and turns out a book of pure delight. Such is the case of Mark Kurlansky and the codfish.” —David McCullough on COD

“Kurlansky finds the world in a grain of salt.” —The New York Times Book Review on SALT

“Kurlansky approaches Havana like an Impressionist painter, building the image of this metropolis of 2 million inhabitants with subtle brushstrokes.” —Washington Post on HAVANA

“An early favorite . . . Everybody can learn, and everybody will eat.” —Washington Post on INTERNATIONAL NIGHT