The Greatest Speeches of Donald J. Trump: 45th President of the United States of America with an Introduction by Presidential Historian Craig Shirley (Hardcover) 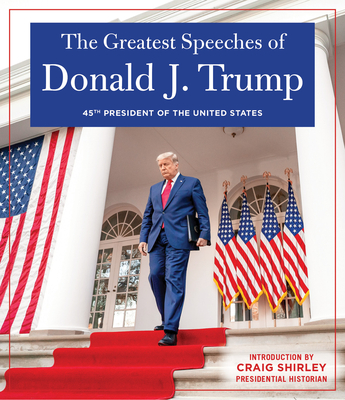 CRAIG SHIRLEY (LANCASTER & ESSEX COUNTY, VIRGINIA) is the author of Reagan Rising, Rendezvous with Destiny, Reagan's Revolution, Last Act and the New York Times bestseller December 1941. He is a regular commentator throughout the media and a contributor to national publications, and was hailed by the London Telegraph as "the best of the Reagan biographers." He is the Visiting Reagan Scholar at Eureka College, Reagan's alma mater, and lectures often at the Reagan Library and the Reagan Ranch, the founder of Shirley & Banister Public Affairs and was chosen in 2005 by Springfield College as their Outstanding Alumnus. Shirley, a widely sought after speaker and commentator, appears regularly on many network and cable shows including Newsmax, FOX News, MSNBC, CNN, ABC. CBS, CNBC, C-SPAN and others. He has also written extensively for the Wall Street Journal, Washington Post, Newsmax magazine, the Washington Examiner, the Washington Times, the Los Angeles Times, Town Hall, the Weekly Standard, Politico, Reuters and many other publications. He and his wife, Zorine, divide their time between Ben Lomond, a three-hundred-year-old Georgian manor house in Essex County, Virginia, and Trickle Down Point on the Rappahannock River in Lancaster, Virginia. They are the parents of four children, Matthew, Andrew, Taylor, and Mitchell. The author lives and works in Lancaster and Essex County Virginia. craigshirley.com