Blitz: Trump Will Smash the Left and Win (Hardcover) 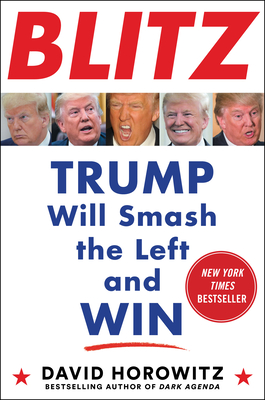 'BLITZ, Trump Will Smash the Left and Win', by David Horowitz. Amazon #1 Bestseller. Hot book, great author -- President Donald J. Trump BUCKLE UP--2020 WILL BE THE POLITICAL RIDE OF YOUR LIFE IN NOVEMBER TRUMP WILL SMASH THE LEFT AND WIN "We love David Horowitz. He thinks Trump is gonna win in a landslide in November, and he gives reasons why in the book, and he says Republicans are gonna be singing 'Happy Days Are Here Again' once November comes and the election is over and the votes are counted." -- Rush Limbaugh

He is one of the bravest guys. He found the real intent of the Left] was to control America. He has never, ever sat down. A true national treasure." -- Glenn Beck

"If you're interested in debating deranged liberals with facts, you won't want to miss this latest book." -- Donald Trump, Jr.

"BLITZ is a MUST-read for those who want to better understand what is really happening in the 'idea war' for the soul of America." -- Governor Mike Huckabee

BLITZ reveals the attacks made against Trump have been the most brutal ever mounted against a sitting president of the United States. Blinded by deep-seated hatred of his person and his policies, the left even desperately tried to oust Trump in a failed impeachment bid. Horowitz shows that their very attacks--targeting a man whose mission has been to "Drain the Swamp" and "Make America Great Again" backfired, turning Trump himself into a near martyrwhile igniting the fervor of his "base."

With the 2020 election upon us, New York Times bestselling author David Horowitz chronicles the brutal battles, bitter backlash, and leftwing lies Trump has faced as Democrats repeatedly try to sabotage his presidency. You'll discover the left's terrifying socialist and, in some cases, communist agendas as you've never seen them before. Trump's response? In the meantime, he's going to steamroll this opposition in November using the same playbook he has used to win before. In BLITZ you will find shocking revelations:

The effort to remove and destroy our duly elected President may be the greatest challenge America has faced since the Civil War, explains Horowitz. For the first time BLITZ exposes the left's strategy to take down Trump, and how Trump not only beat them at their own game, but how he's turning the tables on them to achieve a stunning reelection win come November.

"An indispensable book--BLITZ-- explaining why today's Democrats are so dangerous and why President Trump is their nemesis." -- Mark R. Levin, New York Times bestselling author of Unfreedom of the Press

"BLITZ is the latest must-read from Horowitz: insightful, hard-hitting, controversial, and uncompromising. Ignore him at your peril." -- Peter Schweizer, New York Times bestselling author of Clinton Cash and Profiles in Corruption

"This is the book your anti-Trump relatives and friends should read...as clear a moral indictment of the anti-Trump left as has been written." -- Dennis Prager, President of PragerU and New York Times bestselling author

"Unparalleled insight into the current political climate, how we got here and what it means for 2020 elections." -- Sean Spicer, Host of Spicer & Co., Newsmax TV

"Horowitz understands the left's malevolent goals and how to stop them. This is a must read-book " -- Charlie Kirk, New York Times bestselling author of The MAGA Doctrine

" David Horowitz] author and political activist believes President Donald Trump should focus on the issue of keeping Americans safe to help secure his re-election in the fall." - One News Now

David Horowitz is a noted conservative thinker, writer and commentator and the Founder and CEO of the David Horowitz Freedom Center in Los Angeles, CA, whose mission is "to defend free societies which are under attack from enemies within and without, both secular and religious;" and further, to defend the principles of individual freedom, the rule of law, private property, limited government and to reestablish academic freedom in American schools. The Freedom Center publishes the online news magazine FrontPageMag.com, where Horowitz serves as Editor-in-Chief. David Horowitz grew up a red diaper baby in a communist community in Sunnyside, Queens, and was one of the founders of the New Left in the 1960s and an editor of its largest magazine, Ramparts; but forced to confront some difficult truths about the political left, Horowitz ultimately found a political and intellectual home as a conservative activist. Cultural critic Camille Paglia has said of David Horowitz: I respect the astute and rigorously unsentimental David Horowitz as one of America's most original and courageous political analysts. . . .I think that, a century from now, cultural historians will find David Horowitz's spiritual and political odyssey paradigmatic for our time. Norman Podhoretz, former editor of Commentary magazine, says of Horowitz: David Horowitz is hated by the Left because he is not only an apostate but has been even more relentless and aggressive in attacking his former political allies than some of us who preceded him in what I once called 'breaking ranks' with that world. He has also taken the polemical and organizational techniques he learned in his days on the left, and figured out how to use them against the Left, whose vulnerabilities he knows in his bones. Horowitz has written more than a dozen books, including The New York Times Bestseller BIG AGENDA: TRUMP'S REAL PLAN TO SAVE AMERICA, as well as DARK AGENDA: THE WAR TO DESTROY CHRISTIAN AMERICA, UNHOLY ALLIANCE, THE BLACK BOOK OF THE AMERICAN LEFT, TAKE NO PRISONERS, PROGRESSIVE RACISM, THJE PROFESSORS and his celebrated memoirs MORTALITY & FAITH and RADICAL SON. https: //www.horowitzfreedomcenter.org/ http: //www.frontpagemag.com/ The David Horowitz Freedom Center is located in Los Angeles, CA.