Facts & Fury: An Unapologetic Primer on How the GOP Has Destroyed American Democracy (Hardcover) 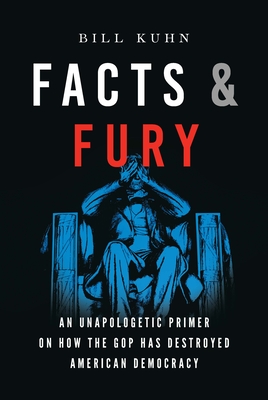 From the cofounder of Fight for a Better America, the non-profit organization dedicated to voter engagement and local grassroots organizing, is a searing, unflinching, and thorough exploration of the Republican Party's dissolution of government. ​"Only when enough of us recognize that the Republicans are waging a war on our democracy will we be able to rally a resistance, fight back, and reclaim our government," writes author Bill Kuhn in this engrossing and outraged study of the GOP's commitment to weaken public institutions and erode the public's trust in democracy. Although conflicts over the role of government have always existed, the level of partisanship and division that we know today is staggering. Can the US repair forty years of the right's destruction? The answer is yes, says Kuhn, but only if voters understand the Republican Party's role in the country's growing division. Written in brilliant and easily digestible chapters, you will discover how Trump became the logical consequence of decades worth of corruption, fear-mongering, and destructive policies. Kuhn uncovers the blatantly racist style of politics inherent in the GOP from Goldwater's opposition to the Civil Rights Movement to Reagan's aversion to public welfare. Each chapter is poignant and a well-researched entry contributing to the national conversation and debate of how we got to where we are today. Facts & Fury is a revelatory work of scholarship and a laceration of the Republication Party that will energize the country and encourage discussion. Much more, it is a call to arms to halt the GOP's efforts, engage our neighbors, and ultimately strengthen American democracy.

A New York City native, Bill Kuhn grew up in a political household. His mother was a key fundraiser for the Democratic Party, most notably for Walter Mondale during his 1984 presidential run against Ronald Reagan. His stepfather served as a lawyer on the judiciary committee during President Nixon's impeachment, and as a White House counsel to President Clinton. Politics and the Washington experience were the air he breathed during his formative years. Bill graduated from Georgetown University with a BS in finance and holds graduate degrees from Columbia University (MBA) and Hunter College (MEd). He began his career in investment banking and capital markets (Citi, Collins Stewart, and Bank Otrikitie in Moscow), but ultimately came to the realization that his interests were better aligned with education and policy. He became a dean and teacher of mathematics and economics at a high school while pursuing special-education research at Hunter. The transition has spurred a new outlook on life for Bill, and he has developed a passion for improving education and addressing inequality in our country. He also co-founded Fight for a Better America, an organization that invests in key battleground districts and states throughout the US, with the goal of either flipping them blue or maintaining a Democratic incumbent. Through his travels with the organization, he has made hundreds of contacts with folks in local civic and Democratic clubs throughout the country--primarily in California, Pennsylvania, New York, Florida, and New Jersey--and organized hundreds of volunteers on the ground. He's had thousands of conversations with voters and prospective volunteers about the issues that affect them most. Bill lives in New York City with his wife.