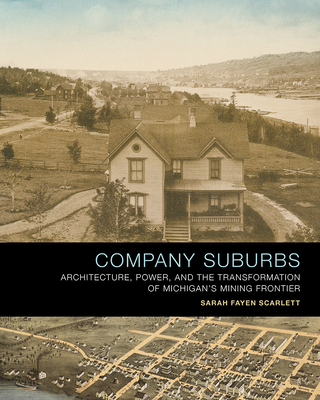 Winner of the 2022 Fred B. Kniffen Book Award from the International Society Landscape, Place, and Material Culture!

Michigan’s Keweenaw Peninsula juts into Lake Superior, pointing from the western Upper Peninsula toward Canada. Native peoples mined copper there for at least five thousand years, but the industrial heyday of the “Copper Country” began in the late nineteenth century, as immigrants from Cornwall, Italy, Finland, and elsewhere came to work in mines largely run from faraway cities such as New York and Boston. In those cities, suburbs had developed to allow wealthier classes to escape the dirt and grime of the industrial center. In the Copper Country, however, the suburbs sprang up nearly adjacent to mines, mills, and coal docks.

Sarah Fayen Scarlett contrasts two types of neighborhoods that transformed Michigan’s mining frontier between 1875 and 1920: paternalistic company towns built for the workers and elite suburbs created by the region’s network of business leaders. Richly illustrated with drawings, maps, and photographs, Company Suburbs details the development of these understudied cultural landscapes that arose when elites began to build housing that was architecturally distinct from that of the multiethnic workers within the old company towns. They followed national trends and created social hierarchies in the process, but also, uniquely, incorporated pre-existing mining features and adapted company housing practices. This idiosyncratic form of suburbanization belies the assumption that suburbs and industry were independent developments.

SARAH FAYEN SCARLETT is an associate professor of history at Michigan Technological University. Her work has appeared in American Quarterly and the Journal of Modern Craft.