Subverted: How I Helped the Sexual Revolution Hijack the Women's Movement (Paperback) 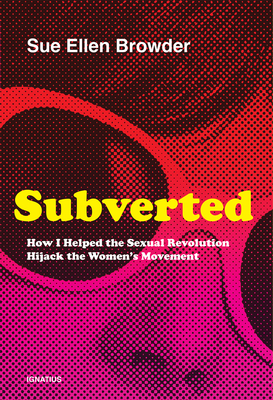 Contraception and abortion were not originally part of the 1960s women’s movement. How did the women’s movement, which fought for equal opportunity for women in education and the workplace, and the sexual revolution, which reduced women to ambitious sex objects, become so united?

In Subverted, Sue Ellen Browder documents for the first time how it all happened, in her own life and in the life of an entire country. Trained at the University of Missouri School of Journalism to be an investigative journalist, Browder unwittingly betrayed her true calling and became a propagandist for sexual liberation. As a long-time freelance writer for Cosmopolitan magazine, she wrote pieces meant to soft-sell unmarried sex, contraception, and abortion as the single woman’s path to personal fulfillment. She did not realize until much later that propagandists higher and cleverer than herself were influencing her thinking and her personal choices as they subverted the women’s movement.

The thirst for truth, integrity, and justice for women that led Browder into journalism in the first place eventually led her to find forgiveness and freedom in the place she least expected to find them. Her in-depth research, her probing analysis, and her honest self-reflection set the record straight and illumine a way forward for others who have suffered from the unholy alliance between the women’s movement and the sexual revolution.

Sue Ellen Browder is a freelance writer who has appeared on Oprah, the Today Show, and hundreds of radio talk shows. Her work for Cosmopolitan, New Woman, Woman’s Day, and other magazines has given her a lifetime of experience with the women’s movement as it unfolded in the media, both on the public stage and behind the scenes.