Allow Me to Retort: A Black Guy's Guide to the Constitution (Paperback) 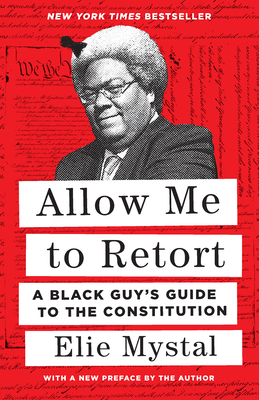 By Elie Mystal
$18.99
Unavailable
Not Yet Published

When Elie Mystal went on The View to discuss the hardcover of Allow Me to Retort and called the Constitution "trash," the internet exploded. Media from Newsweek to Black News Tonight covered it, and the book shot up bestsellers lists at the New York Times, Bookshop.org, Amazon, and elsewhere.

Now this "pugnacious and entertaining critique of conservative interpretations of the Constitution" (Publishers Weekly) is available in an affordable paperback edition. In chapters ranging from "Why You Can't Punch a Cop" and "It's Not Unusual to Be Cruel" to "Everything You Know About the Second Amendment Is Wrong" and "The Abortion Chapter," the legal commentator that Samantha Bee calls "irrepressible and righteously indignant" weighs in on every hot-button issue facing the country (and the Supreme Court) today. As the New York Journal of Books observed, "It is impossible to enjoy reading the Constitution more than through the searing perspective of the brilliant Twainesque humor of Elie Mystal in Allow Me to Retort."

Called "the funniest lawyer in America" by Matt Levine of Bloomberg Opinion, Mystal brings the same tactics he uses to defend the idea of a fair and equal society on MSNBC and CNN to what Washington Lawyer calls a "witty, profane, and well-argued" book that lays bare the truth of the Republican project to keep America forever tethered to its slaveholding past.

Elie Mystal is The Nation's legal analyst and justice correspondent, an Alfred Knobler Fellow at the Type Media Center, and the legal editor of the More Perfect podcast on the Supreme Court for Radiolab. He is a graduate of Harvard College and Harvard Law School, the former executive editor of Above the Law, a former associate at Debevoise & Plimpton, and a frequent guest on MSNBC and Sirius XM. The author of Allow Me to Retort (The New Press), he lives in New York.