This is What Democracy Looked Like: A Visual History of the Printed Ballot (Hardcover) 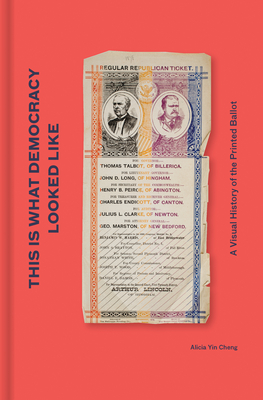 This Is What Democracy Looked Like, the first illustrated history of printed ballot design, illuminates the noble but often flawed process at the heart of our democracy. An exploration and celebration of US ballots from the nineteenth and early twentieth centuries, this visual history reveals unregulated, outlandish, and, at times, absurd designs that reflect the explosive growth and changing face of the voting public. The ballots offer insight into a pivotal time in American history—a period of tectonic shifts in the electoral system—fraught with electoral fraud, disenfranchisement, scams, and skullduggery, as parties printed their own tickets and voters risked their lives going to the polls.

Alicia Yin Cheng is a founding partner of MGMT. design in Brooklyn, New York. She currently serves as an external critic for the MFA program at the Rhode Island School of Design and has taught at Yale University, Maryland Institute College of Art, Barnard College, and Cooper Union. Cheng was a past board member of the AIGA/NY chapter and the Fine Arts Federation.

"Among the many fights, legal victories, and historic moments that mark this evolution [of American democracy], there is an artifact that stands out as a record of the journey: the electoral ballot. It is, to be sure, an ephemeral one. As designer Alicia Yin Cheng writes in the introduction, "as a material tool of democracy, the ballot should not, by its nature, be collectible." Her book, tracing the history of the paper ballot with a wealth of reproductions of electoral artifacts from the early 19th century to 2018."
- Quartz

"For those interested in typography, graphic design, letterpress printing, user experience design, or democracy: This Is What Democracy Looked Like balances design and history splendidly."
- TYPE Magazine

"Alicia Yin Cheng's This is What Democracy Looked Like provides a concise yet detailed look at the history of the printed electoral ballot in the United States. Given the tumultuous aftermath of the 2020 US Presidential election, with outgoing President Trump making unsubstantiated claims of electoral fraud, the recent storming of the US Capitol building by his supporters and Trump's subsequent impeachment, the book is just as relevant now, if not more so, than when it was initially published last summer."
- LSE Review of Books

"Generally speaking, ballots are as exciting as you'd expect a bureaucratic document to be. That wasn't always the case. They used to be colorful, both literally and figuratively, with vivid iconography, ostentatious embellishments and, on occasion, ridiculous punctuation. (One Whig ticket from 1815 contained 15 exclamation points.) Graphic designer Alicia Yin Cheng explores the evolution of ballot design in her book, This Is What Democracy Looked Like: A Visual History of the Printed Ballot."
- The Washington Post

Alicia Yin Cheng's "This Is What Democracy Looked Like: A Visual History of the Printed Ballot" arrives with unnerving pertinence. As you may have noticed, this year there's a presidential election, it's especially fraught, and part of the fraughtness has to do with voter suppression, mail-in ballots, and the prospect of voting irregularities....The most intriguing aspect of Cheng's book isn't visual but conceptual. She takes something that's inherently private and makes it public.
- The Boston Globe

"This Is What Democracy Looked Like is bookended by the same humble artifact: the 'butterfly ballot' that notoriously swung the 2000 election. As an introductory essay notes, 'the structure and design of the ballot can have enormous consequences for how politics function or fail us.' Showing hundreds of examples of voting ephemera, Cheng stresses their relations to historical power struggles. The ballot was-and is-also a site of conflict for disenfranchised groups, who fought for the monumental mundanity of suffrage. 'While the more contemporary versions may be less graphically outrageous,' Cheng writes, 'that is also the point.'
- Metropolis

"Cheng has produced a truly interdisciplinary work, employing the material culture of this country's elections as the centerpiece of three essays on the democratic process....Almost 200 glorious examples of printed, mostly letterpress, ballots, many with candidates' names set in serpentine lines of type beneath semicircular party names and illustrations of flags, eagles, municipal buildings, and candidates' portraits."
- Library Journal

"Vividly illustrates how our ballots reveal the history of America's evolving politics and prejudices."
- Pittsburgh Post-Gazette

"The first illustrated history of the printed ballot. It shows that controversy and confrontation at the polls is nothing new. The ballots offer insight into periods of tectonic shifts in the electoral system, and the fraud, disenfranchisement, scams and skullduggery that have historically plagued the electoral process."
- Design Arts Daily

"With so much at stake in every election-and especially this one-Cheng's fascinating book is a timely reminder to always read between the lines and to exercise your right to vote."
- The Slowdown

"In This Is What Democracy Looked Like: A Visual History of the Printed Ballot, author Alicia Yin Cheng, looks at ballots throughout the 19th and 20th centuries. Cheng reveals how their colors, text, images, and decoration often say even more than the candidates up for election that cycle. The ballots are material evidence that show the evolution of voting-and democracy-in the U.S."
- Fast Company

"Today's dry ballot designs and campaign materials might have you hankering for a more expressive past-but be careful what you wish for, because they are indeed a mixed bag....[The is What Democracy Looked Like] sheds light on what is today a little-known electoral period in U.S. history, when there was zero federal government oversight of ballots."
- PRINT Magazine