The Genome Defense: Inside the Epic Legal Battle to Determine Who Owns Your DNA (Hardcover) 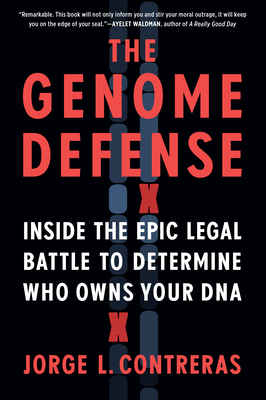 In this riveting, behind-the-scenes courtroom drama, a brilliant legal team battles corporate greed and government overreach for our fundamental right to control our genes.

When attorney Chris Hansen learned that the U.S. government was issuing patents for human genes to biotech companies, his first thought was, How can a corporation own what makes us who we are? Then he discovered that women were being charged exorbitant fees to test for hereditary breast and ovarian cancers, tests they desperately needed—all because Myriad Genetics had patented the famous BRCA genes. So he sued them.

Jorge L. Contreras, one of the nation’s foremost authorities on human genetics law, has devoted years to investigating the groundbreaking civil rights case known as AMP v. Myriad. In The Genome Defense Contreras gives us the view from inside as Hansen and his team of ACLU lawyers, along with a committed group of activists, scientists, and physicians, take their one-in-a-million case all the way to the U.S. Supreme Court. Contreras interviewed more than a hundred key players involved in all aspects of the case—from judges and policy makers to ethicists and genetic counselors, as well as cancer survivors and those whose lives would be impacted by the decision—expertly weaving together their stories into a fascinating narrative of this pivotal moment in history.

The Genome Defense is a powerful and compelling story about how society must balance scientific discovery with corporate profits and the rights of all people.

Jorge L. Contreras received his law degree from Harvard and teaches intellectual property, science policy and the law and ethics of genetics at the University of Utah, and has served on high‑level governmental advisory committees. His articles have appeared in Science, Nature, Harvard Journal of Law and Technology, among others. He has been featured on NPR, PRI and BBC radio, and his opinions are cited in the New York Times, the Wall Street Journal, the Economist, andthe Washington Post.

“A compelling and thoroughly researched narrative history of a seminal lawsuit.”
—The Wall Street Journal

“Ably and affectingly detailed . . . This story stands as a guide to the forces that shape an increasingly important industry—and to the vexed influence of patents.”
—Nature

“The Genome Defense provides an incomparable perspective on a landmark Supreme Court case, and it is a testament to the importance of intellectual property law to humanity’s prosperity.”
—Jessica Silbey, author of The Eureka Myth: Creators, Innovators, and Everyday Intellectual Property

"Jorge L. Contreras, a law professor at the University of Utah, interviewed nearly 100 lawyers, patients, scientists and policymakers in this behind-the-scenes history of Molecular Pathology vs. Myriad Genetics, a long-shot lawsuit that culminated in a landmark 2013 Supreme Court decision that opened the human genome to the benefit of researchers, cancer patients and everyday Americans."
—The New York Times Book Review ("11 New Works of Nonfiction to Read This Season")

“Remarkable. Contreras manages to make a book about the lawsuit that ended gene patenting in America read like a thriller. This book will not only inform you and stir your moral outrage, it will keep you on the edge of your seat.”
—Ayelet Waldman, author of A Really Good Day

“Fascinating . . . Contreras goes behind the scenes with many of the key participants, offering an inside look at the legal strategy and the potential consequences on either side of the final decision.”
—Salt Lake City Weekly

“An unflinching critique of the biotech industry's business practices . . . Contreras never presumes that his readers can't keep up, until suddenly a lay reader can likely understand the fundamentals of patent eligibility. That mix makes the book an incredibly accessible and engaging read, which . . . keeps readers from putting it down.”
—Law360

“Eye-opening . . . Contreras brings the large cast of case participants to life with vivid prose, and the exciting final spectacle before the Supreme Court is heart-pumping . . . a thorough page-turner.”
—Publishers Weekly, starred review

“A superb lesson on patents in general and the grotesque American patent system in particular . . . Contreras assembles a large cast of lawyers, judges, activists, scientists, and patients and engagingly describes four years of tortuous legal action that saw victory in federal court, reversal on appeal, and a final triumph in the Supreme Court . . . Fascinating.”
—Kirkus Reviews, starred review

“A gripping and important tale of how corporations were patenting our own genes and selling them back to us. Contreras give us front-row-seat access, deft character sketches and crystal-clear explanations of law and science.”
—Jordan Fisher Smith, author of Engineering Eden

“A remarkable, fast-paced read. Contreras tells the behind-the-scenes story of how the Supreme Court stopped the patenting of the human genome. He does it in such an engaging style that it’s almost like reading a legal thriller.”
—Professor Mark A. Lemley, Director, Stanford Program in Law, Science, and Technology

“Both a page-turner full of colorful characters and a profound commentary about how corporate giants use the law to monopolize knowledge—and what we can do about it.”
—Orly Lobel, author of You Don't Own Me: The Court Battles that Exposed Barbie's Dark Side