Deceptions and Myths of the Bible (Paperback) 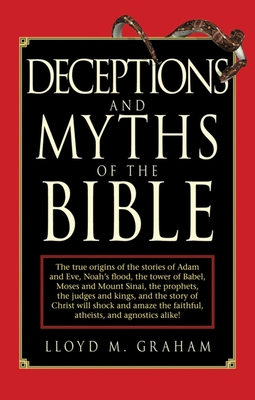 Lloyd M. Graham is out to show that the Bible, both the Old and New Testaments as we know them, are not “holy” nor are they the “word of God” revealed. The stories of the Bible were set down by power-seeking priests eager to inspire awe and to gather flocks who would take part in their rites and rituals, and they weren’t very original, either.
In Deceptions and Myths of the Bible, Graham reintroduces us to the true origins of Adam and Eve, who were derived from a Babylonian account; to the story of Noah’s flood, which was the result of over four hundred years of flood accounts from various ancient civilizations; to the man named Moses who was fashioned after the Syrian story of Mises; and even to the laws of the Bible, which were patterned after the Babylonian Code of Hammurabi. Graham points out the 137 similarities between the story of Jesus and the story of the Egyptian god Horus, and the hundreds and hundreds of similarities between the story of Christ and the Hindu god Krishna.

For any reader interested in history or theology, Graham’s book is essential, eye-opening, and controversial reading. If you are an atheist, you’ll be eager to read these arguments in support of your beliefs. If you are agnostic, you will want to have this evidence at your fingertips as you weigh systems of belief and disbelief. If you are religious, you will want to know how your faith came into being and how a study of history might shake or support your beliefs.