First We Read, Then We Write: Emerson on the Creative Process (Muse Books) (Paperback) 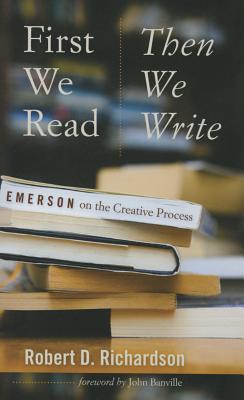 By Robert D. Richardson, John Banville (Foreword by)
$13.00
On Our Shelves Now

Writing was the central passion of Emerson’s life. While his thoughts on the craft are well developed in “The Poet,” “The American Scholar,” Nature, “Goethe,” and “Persian Poetry,” less well known are the many pages in his private journals devoted to the relationship between writing and reading. Here, for the first time, is the Concord Sage’s energetic, exuberant, and unconventional advice on the idea of writing, focused and distilled by the preeminent Emerson biographer at work today.

Emerson advised that “the way to write is to throw your body at the mark when your arrows are spent.” First We Read, Then We Write contains numerous such surprises—from “every word we speak is million-faced” to “talent alone cannot make a writer”—but it is no mere collection of aphorisms and exhortations. Instead, in Robert Richardson’s hands, the biographical and historical context in which Emerson worked becomes clear. Emerson’s advice grew from his personal experience; in practically every moment of his adult life he was either preparing to write, trying to write, or writing. Richardson shows us an Emerson who is no granite bust but instead is a fully fleshed, creative person disarmingly willing to confront his own failures. Emerson urges his readers to try anything—strategies, tricks, makeshifts—speaking not only of the nuts and bolts of writing but also of the grain and sinew of his determination. Whether a writer by trade or a novice, every reader will find something to treasure in this volume. Fearlessly wrestling with “the birthing stage of art,” Emerson’s counsel on being a reader and writer will be read and reread for years to come.

Robert D. Richardson is the author of William James: In the Maelstrom of American Modernism, which won the 2007 Bancroft Prize, Emerson: The Mind on Fire, which won both the Francis Parkman Prize and the Melcher Book Award and was a finalist for a National Book Critics Circle Award, and Henry Thoreau: A Life of the Mind, which also won the Melcher Book Award.

“Robert Richardson has done exquisite service both to Emerson and to the many readers this book will surely attract and leave with a deeper understanding of Emerson the writer. How many of us have read through all the journals to gather his thoughts, often private, uncontained in the essays, about the actual work of turning language into the fertile body of expressed thought? As in his biography of Emerson, The Mind on Fire, we are recipients again of Richardson’s scholarship, his unflagging, inquisitive, humanist unveiling of the great Emerson’s thoughts.”—Mary Oliver

"In this brief, elegant, and quietly passionate volume Robert Richardson has produced an invaluable handbook for the writer and aspirant writer, a copy of which should be presented to every student in every writing class around the world, for it is a serious course he is embarked on, in which he must learn to write not in the hope of expressing his puny self but to be, among other things, a guardian of language."-John Banville, The New York Review of Books

“Richardson is Emerson’s foremost biographer, and he has culled the great man’s work for the kind of specific, timeless instruction that makes the difference between good writing and great writing. This is the book on writing that Emerson would have used to teach his lucky students. The chapter on sentences sparkles, and it alone is worth the purchase. Everyone who wants to learn about writing should read this book.”—Susan Cheever, author, American Bloomsbury and Desire: Where Sex Meets Addiction