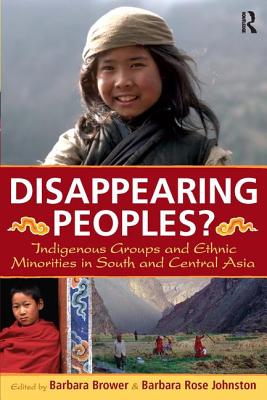 South and Central Asia is a region of extraordinary cultural and environmental diversity and home to nearly one-quarter of the earth's population. Among these diverse peoples are some whose ways of life are threatened by the accelerating assault of forces of change including environmental degradation, population growth, land loss, warfare, disease, and the penetration of global markets. This volume examines twelve Asian groups whose way of life is endangered. Some are "indigenous" peoples, some are not; each group represents a unique answer to the question of how to survive and thrive on the planet earth, and illustrates both the threats and the responses of peoples caught up in the struggle to sustain cultural meaning, identity, and autonomy. Each chapter, written by an expert scholar for a general audience, offers a cultural overview, explores both threats to survival and the group's responses, and provokes discussion and further research with "food for thought." This powerful documentation of both tragedy and hope for the twenty-first-century survival of centuries-old cultures is a key reference for anyone interested in the region, in cultural survival, or in the interplay of diversification and homogenization.

Barbara Brower is Professor of Geography at Portland State University.Barbara Rose Johnston is Senior Research Scholar at the Center for Political Ecology and winner of the Lourdes Arizpe Award, presented by the American Anthropological Association’s Anthropology & Environment Section, for her outstanding contributions in the application of anthropology to environmental issues and discourse. Among her recent publications are Disappearing Peoples: Indigenous Groups and Ethnic Minorities in South and Central Asia (ed., with Barbara Brower, 2007); Half Lives & Half Truths: Confronting the Radioactive Legacies of the Cold War (ed., 2007), Consequential Damages of Nuclear War: The Rongelap Report (with Holly Barker, 2008), and Waging War, Making Peace: Reparations and Human Rights (ed., with Susan Slyomovics, 2008).

"Disappearing Peoples? is a groundbreaking book that describes how economic globalization, imperialism, war, and climate change in the twenty-first century threaten various Asian people’s cultural heritage and how they are striving to maintain their traditions and identity under such extreme pressures. This volume uses twelve chapters on specific peoples—the Raika of India, Tibetans in China and India, Hazara in Afghanistan, Mangghuer in China—to illustrate the strong Introduction, which explains the import of dwindling diversity on humankind. The book provides a good overview that should whet the reader’s appetite for more knowledge about Asian peoples, the causes and consequences of cultural homogenization." - Paula L.W. Sabloff, University of Pennsylvania

"Disappearance of peoples has been a concern of anthropologists since Bastien - all the more crucial since globalization - yet we forget as we clamor for more glamorous topics. This book rightly remembers." - James Peacock

"The issues impacting local indigenous peoples are covered in the outstanding edited volume by Barbara Brower and Barbara Rose Johnston. This book provides the perfect text for leading students through several varying case studies of contemporary impacts to indigenous peoples. Not only is the book culturally encompassing, but it is also geographically and ecologically diverse. As such, it should also be considered essential reading for anyone working in, or interested about, South and Central Asia and its indigenous peoples. Read complete review at: http://indigenouspeoplesissues.com/index.php?view=article&catid=49%3Aasiabooks&id=95%3Adisappearing-peoples-indigenous-groups-and-ethnic-minorities-in-south-and-central-asia&option=com_content&Itemid=66\." - Indigenous Peoples Issues & Resources (http://indigenouspeoplesissues.com) "

"The use of a question mark in their book's title is a good beginning; the editors leave open the possibility that peoples may not be disappearing. Cultures change greatly and heritages shrink, but disappearance often is an exaggeration. The 21st century no doubt will issue serious challenges to the integrity of the Asian peoples considered in this book, so its publication is especially timely, notwithstanding the indigenous groups' relative obscurity. Any and all Asian studies departments and libraries would do well to add it to their collections and curricula. Summing Up: Essential." —R. G. Zanca, Northeastern Illinois University, CHOICE