The Forests of California: A California Field Atlas (Paperback) 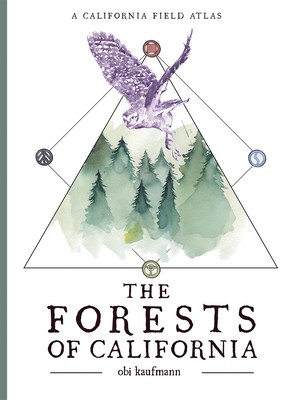 The first book of a major new trilogy from artist-naturalist Obi Kaufmann From the author of The California Field Atlas (#1 San Francisco Chronicle Best Seller) comes a major work that not only guides readers through the Golden State's forested lands, but also presents a profoundly original vision of nature in the twenty-first century. The Forests of California features an abundance of Obi Kaufmann's signature watercolor maps and trail paintings, weaving them into an expansive and accessible exploration of the biodiversity that defines California in the global imagination. Expanding on the style of the Field Atlas, Kaufmann tells an epic story that spans millions of years, nearly one hundred species of trees, and an astonishing richness of ecosystems. The Forests of California is the first volume in a planned trilogy of field atlases, with The Coasts of California and The Deserts of California to follow, and Kaufmann seeks to create nothing less than a new understanding of the more-than-human world. The lessons in this book extend well beyond California's borders. If Peter Wohlleben's The Hidden Life of Trees and Richard Powers's The Overstory opened readers' eyes to the awesome power of arboreal life, The Forests of California gives readers a unique and unprecedented immersion in that power.