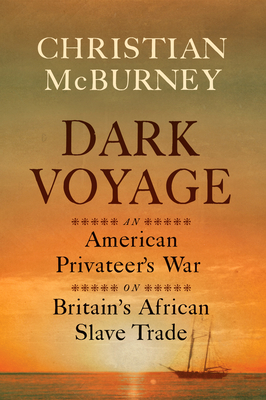 At the start of the American War of Independence, Great Britain dominated overseas commerce and was the leading slave-trading nation in the world. In 1776, American privateers—privately owned ships granted commissions by the Continental Congress to attack and disrupt enemy trade—began to prey on British merchantmen.  Some privateers captured British slave ships with African captives on board just before they arrived at their Caribbean Island destinations.
One privateer was given an extraordinary task: to sail across the Atlantic to attack British slave trading posts and ships on the coast of West Africa. Based on a little-known contemporary primary source, The Journal of the Good Ship Marlborough, the story of this remarkable voyage is told here for the first time and will have a major impact on our understanding of the Atlantic slave trade and the American Revolution. The voyage of the Marlborough was the brainchild of John Brown, a prominent Rhode Island merchant—and an investor in two slave trading voyages himself. The motivation was not altruistic. The officers and crew of the Marlborough wanted to advance the cause of independence from Britain through harming Britain’s economy, but they also desired to enrich themselves by selling the plunder they captured—including enslaved Africans.
The work of the Marlborough and other American privateers was so disruptive that it led to an unintended consequence: virtually halting the British slave trade. British slave merchants, alarmed at losing money from their ships being captured, invested in many fewer slave voyages.  As a result tens of thousands of Africans were not forced onto slave ships, transported to the New World, and consigned to a lifetime of slavery or an early death.
In Dark Voyage: An American Privateer’s War on Britain’s African Slave Trade, veteran researcher and writer Christian McBurney recreates the harrowing voyage of the Marlborough, while placing it in the context of Atlantic World slavery. In Africa, Marlborough’s officers come across an array of African and European slave traders willing to assist them in attacking the British. This book is also the first study to detail the many captures American privateers made of British slave ships during the Revolutionary War.

“Over the last decade, historian Christian McBurney has authored a number of important books about Rhode Island and the American Revolution . . . McBurney’s latest effort, Dark Voyage, is without question his best and is a must-read for students of the state’s history. McBurney’s deep engagement with archives on both sides of the Atlantic, along with sources detailing the history of the slave trade in Africa and the role of local African leaders, helps to shed light on an often overlooked aspect of the Revolution. At the heart of Dark Voyage is a complex tale of slave trading off the African coast and the injustice and horrors it generated, along with the greed, callousness and inhumanity of those who engaged in human trafficking.”—Providence Journal

“By telling the story of a single Revolutionary War privateer, Christian McBurney makes a compelling argument about the effect of American privateering on the British slave trade. . . . The most impressive aspect of the book is McBurney’s objective analysis of complexity at the core of the Marlborough’s story. By making a prize of a slave ship, the crew of the Marlborough were not freeing slaves, but taking part in the slave trade themselves. A less serious historian could have whitewashed Marlborough’s participation in the slave trade and made the crew out to be unsung heroes of the American Revolution. Or the Marlborough could have been raked over the coals for profiting on slavery while dismissing the privateers’ effect on the British economy and war effort. Instead, McBurney makes it clear the Marlborough’s owner and crew were not heroes, but that their deeds are worthy of research. Dark Voyage sheds light on a previously overlooked series of events during the American Revolution and reveals their hidden complexity. McBurney’s work makes for an engaging read that can add a greater understanding of American privateering in the Revolutionary War and the British slave trade.”—Naval History

“Privateers are often likened to the militia at sea. Although focused on the singularly important and remarkable voyage of the Rhode Island privateer Marlborough to Africa, Christian McBurney gives the first systematic account of the impact American privateers had on the British slave trade, providing further evidence of the effectiveness of the privateers as a tool of war against the British. His book also is an excellent vehicle for exploring both American privateering and the British slave trade.”—Andrew J. O'Shaughnessy, author of The Men Who Lost America, British Leadership, the American Revolution, and the Fate of the Empire


“Dark Voyage is an important and welcome contribution to the literature. By detailing the significant impact that American privateers during the War for Independence had on Great Britain’s African slave trade, mainly through the extraordinary story of an American privateer’s voyage to Africa, McBurney highlights an overlooked, but critical part of not only the Revolutionary War story, but also the story of slavery writ large.”—Eric Jay Dolin, author Rebels at Sea: Privateering in the American Revolution

“Historians have not adequately explained the slave trade’s spectacular collapse during the American Revolutionary War. Through his focus on the Marlborough, an American privateer that wreaked havoc on Britain’s slave trade in Africa, Christian McBurney illuminates in precise detail how the war shattered the business. He also reveals the remarkable array of people engaged in slaving across the Atlantic World, and the terrible consequences of their decisions for the enslaved. Dark Voyage thus sheds important new light on the slave trade’s history and the American Revolution War’s truly global impact.”—Nicholas Radburn, Lecturer at Lancaster University and co-editor of SlaveVoyages.org