The Novelist: A Novel (Hardcover) 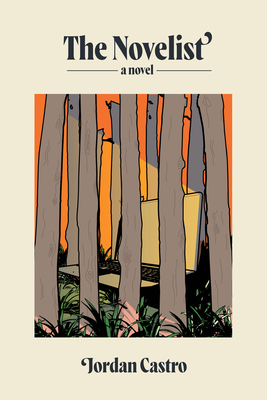 Brisk and shockingly witty, exuberantly scatological as well as deeply wise, The Novelist is a delight. Jordan Castro is a rare new talent: an author highly attuned to the traditions he is working within while also offering a refreshingly fun sendup of life beset by the endless scroll. —Mary South, author of You Will Never Be Forgotten

In Jordan Castro’s inventive, funny, and surprisingly tender first novel, we follow a young man over the course of a single morning as he tries and fails to write an autobiographical novel, finding himself instead drawn into the infinite spaces of Twitter, quotidian rituals, and his own mind.

The act of making coffee prompts a reflection on the limits of self-knowledge; an editor’s embarrassing tweet sparks rage at the literary establishment; a meditation on first person versus third examines choice and action; an Instagram post about the ethics of having children triggers mimetic rivalry; the act of doing the dishes is at once ordinary and profound: one of the many small commitments that make up a life of stability.

The Novelist: A Novel pays tribute to Nicholson Baker’s The Mezzanine and Thomas Bernhard’s Woodcutters, but in the end is a wholly original novel about language and consciousness, the internet and social media, and addiction and recovery.

Jordan Castro is the author of two poetry books and the former editor of New York Tyrant Magazine. He is from Cleveland, Ohio. The Novelist is his first novel.

A NPR Best Book of the Year

"Castro’s fiction debut is as meta as it gets, but that’s part of its immense charm . . . Sweet, funny and beautifully written." —Michael Schaub, A NPR Best Book of the Year

"Superbly captures the circuitous psychosis of the degenerate social media user who can’t stop clicking and eventually becomes one with the cursor . . . Its slimness and autofictional pyrotechnics belie its philosophical heft and seriousness. Initially, it gives off the impression that it’s a funny novel with traces of seriousness, but in actuality, it’s a serious book that uses humor to lull the reader into a comfortable state before unleashing the vitriolic, yet life-affirming, rant that is the heart of the narrative." —Alex Perez, Washington Examiner

"Jordan Castro’s The Novelist nails the experience of being online, in all its abject glory." —Kate Knibbs, WIRED

"Very funny . . . [A] critique of his, and our, collectively frayed attention." —Maddie Crum, Vulture

"The Novelist’s observations about using social media . . . are accurate, but where the novel really exceeds the standard criticism is in turning this distraction into the drumbeat of modern life, on top of which a compelling guy riffs about life, literature, and pooping . . . Castro has an ear for comic timing and eye for the kind of observations that linger just below consciousness." —Hanson O'Haver, Gawker

"The entire plot, or lack thereof, unspools over the course of a few hours. It's a clever conceit that Castro executes with disarming sincerity, exploring his narrator’s quotidian mundanities and interior life with reverence and precision . . . Where The Novelist most succeeds is in its use of tropes of the genre to transcend the genre, pushing its premise to some logical limit, stopping just short of the cliff over which the project might fall into a satirical abyss." —Gideon Jacobs, Interview

"The title of Jordan Castro’s The Novelist: A Novel captures the joke that drives his fiction: it self-reflexively examines the novel form, even as it eschews so many things that might typically bring us to novels . . . But The Novelist: A Novel excels in ways other than this conceptual premise; the novel features exquisite moments that blend vivid description with abject, ridiculous situations . . . Jordan Castro writes well. Across his debut novel, he demonstrates technical skill, able to mingle genres and details into compelling and pleasurable prose. In the process, he reveals that—even if his protagonist doesn’t know it—there is so much more to a novel than autofictional backflips or life that you can get wrong." —Adam Fales, Full Stop

"Jordan Castro's debut novel, The Novelist, cleverly cops to its influences—like Nicholson Baker’s early reverential mundanity yoked with Thomas Bernhard’s righteous wit—but brings a philosophical fervor to its charismatic self-indulgence . . . It’s a careful report on the mental gymnastics so familiar to our tech-addled brains, a roast of the stunted evolution of small press literature, and an earnest metafictional brooding over what a novel should do. Its titular narrator practically pleads, 'I wanted my first novel to be taken seriously.' The Novelist deserves at least as much." —Crow Jonah Norlander, Los Angeles Review of Books

"An engaging reflection on the anxieties of writing autofiction, and of the genre as it exists today . . . The Novelist shines—not only in its exploration of the conventions of the genre, but in [Castro's] experimentation with it as well . . . A highly self-aware novel." —Joshua Vigil, Chicago Review of Books

"A book which balances struggle, commentary, and philosophy with wit, cleverness, and bathroom humor . . . It also transcends that lowest common denominator of relatability to perform sincere examinations of what it means to attempt writing or art or creativity in the modern world . . . Castro writes with such presence of mind, such introspection and observation and, yes, mindfulness." —Nathan Winer, Cleveland Review of Books

"Bitingly funny [and] scatalogically exuberant . . . Castro’s inhalable first novel manages to be both an uncanny reflection of our collective fragmented attention spans, and such a strong, cohesive narrative that I read it straight through . . . A generous portrait of what it takes to be truly creative, rather than reactive or imitative. With The Novelist, Castro reveals the ways in which inspiration is never the single lightning bolt we wish it would be; it needs to be teased out and encouraged, given space to grow louder and louder, until we can’t ignore its buzz and brilliance." —Kristin Iversen, Just Circling Back

"Compact, brilliant, and very funny . . . Castro has committed the unlikely act of attending to his art while including its corruption, a tradition all its own, thus making it all the more contemporary and comedic." —Scott Cheshire, The Brooklyn Rail

"A hilarious satire about trying to write a novel. It’s an inventive insight into the creative life that is completely binge-worthy." —Adam Vitcavage, Debutiful

"Castro’s debut novel uses the process of writing (and not-writing) to reflect on social media’s inescapable and numbing pull. It also upends the historical 'drug novel' by offering a portrait of what life looks like in recovery. The narrator’s hopeful reorientation out of this simulated, technological world opens space to be present, to think of his partner, and to return home humbled by the machinations of the actual world." —Taylor Lewandowski, Bookforum

"This is a confident, unique take on autofiction, a form that lends itself well to Castro’s focus on the endless distractions of modern life, and it is hilarious and enthralling, to boot." —Booklist