The Language of Architecture: 26 Principles Every Architect Should Know (Paperback) 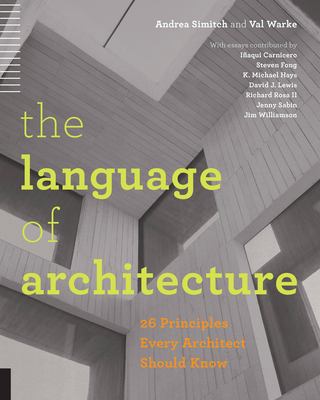 In order to master the foundation of architecture, you must first master the basic building blocks of its language; the definitions, function, and usage. The Language of Architecture provides students and professional architects with the basic elements of architectural design, divided into twenty-six easy-to-comprehend chapters. This visual reference includes an introduction to architecture design, historical view of the elements, as well as an overview of how these elements can and have been used across multiple design disciplines. Whether you're new to the field or have been an architect for years, you'll want to flip through the pages of this book and use it as your go-to reference for inspiration and ideas. This comprehensive learning tool is the one book you'll want as a staple in your library.

Andrea Simitch is an educator and an architect. She is the Director of the Bachelor of Architecture Program in the Department of Architecture at Cornell University, and an associate professor with tenure. She has also served as Associate Dean of Cornell's College of Architecture, Art, and Planning, and as Director of Undergraduate Studies. She studied architecture at the Ecole Special d'Architecture in Paris and received her B.Arch. degree from Cornell University in 1979. She began her teaching career at Cornell in 1983 and was the first female architect to be granted tenure in the Department of Architecture there. She teaches courses in architectural design as well as architectural representation and furniture design, with works by her students having been exhibited at the International Contemporary Furniture Fair in New York. She has taught extensively for Cornell in numerous international venuees that include Europe, Central America, and South America. She has been a panelist on the New York State Council on the Arts and a visiting professor at numerous universities including the University of Toronto, Rensselaer Polytechnic Institute, Tunghai University, and The University of Minnesota. She is also a principal of Simith + Warke Architects, a collaborative practice with work that includes residential, commercial, and speculative projects. Her collages have been included in Joao Alvaro Rocha's monograph Architectures, and she has contributed several essays to the Cornell Journal of Architecture, most recently "Re-Collage" in number 8.

Val Warke is an associate professor at Cornell University's Department of Architecture, where he has been a department chair, a director of graduate studies, and the coordinator of the first year B.Arch. program. In addition to architecture, he is also a member of the graduate field of Fabric Science and Apparel Design at Cornell. Previously, he was an assistant professor at Harvard University's Graduate School of Design. He has authored numerous essays on architectural design, criticism, and theory, which have appeared in journals such as Assemblage, A+U, Cornell Journal of Architecture, and Harvard Design Magazine, as well as in many monographs; and he has collaborated with Thom Mayne in writing the book Morphosis. Recently, his research has focused on genre theory, including issues of fashion, formalism, populism, reception, and various associations to literary theory and ctiticism, especially as related to the work of Mikhail Bakhtin. As a partner in Simitch + Warke, he has collaborated on the design of numerous projects and competitions from the scale of the house to that of the city. He received his B.Arch. from Cornell University and his M.Arch. from Harvard University.

"Architects Simitch and Warke (both, Cornell Univ.) offer an approachable, visual guidebook and reference to the basics of the discipline, equating learning the foundational principles of the architectural process to learning a new language. The language itself comprises 26 building blocks - basic principles that inform the integrity of timeless design. The authors identify these principles as "vital fundamentals." Although the authors have limited themselves to 26 elements in a nod to the alphabet, this volume does not belabor the analogy. It is erudite, insightful, and highly illustrated, reflecting the complexity and beauty of architectural language. As the introduction states, architecture is best considered comparable to "poetic language," and the authors deliver by honing difficult ideas to their essentials. In this volume for both students and professionals, each chapter is succinct and thought provoking. Summing Up: *** Highly recommended." - Choice