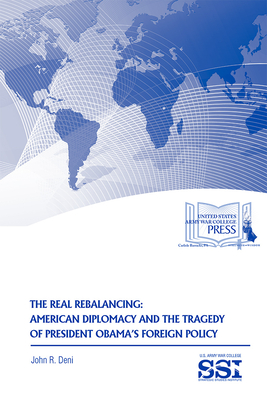 American security policy rests on a three-legged stool consisting of defense, diplomacy, and development. As President Obama implied in his May 2014 speech at West Point, the United States is in the midst of a resurgence of diplomacy and development, as it seeks to leverage diplomatic influence, foreign aid, and multilateral institutions to solve the most vexing international security challenges. However, the dramatic rebalance toward diplomacy and development over the last several years has largely has failed. Rhetoric, official strategies, and actual policies have all aimed at rebalancing the three legs of the foreign policy stool. However, several factors point to a continued militarization of U.S. foreign policy, including funding levels, legal authorities, and the growing body of evidence that civilian agencies of the U.S. Government lack the resources, skills, and capabilities to achieve foreign policy objectives. Continued reliance by senior decisionmakers at both ends of Pennsylvania Avenue on the U.S. military in the development, planning, and implementation of U.S. foreign policy has significant implications. Foremost among them is the fact that the military itself must prepare for a future not terribly unlike the very recent past.

AUDIENCE: Historians, policymakers, political scientists, and international affairs personnel may be interested in this guide that analyzes the rebalancing of American diplomacy within the Asia-Pacific region during Present Barack Obama’s administration.Additionally, students pursuing course work in military science and international relations degree programs may also be interested in this work.

ABOUT THE AUTHOR
JOHN R. DENI is a Research Professor of Joint, Interagency, Intergovernmental, and Multinational (JIIM) Security Studies at the U.S. Army War College’s Strategic Studies Institute (SSI). He is also an adjunct lecturer at the American University’s School of Interna­tional Service. Previously, he worked for 8 years as a political advisor for senior U.S. military commanders in Europe. Prior to that, he spent 2 years as a strategic planner specializing in U.S. security cooperation and military-to-military relations. While working for the U.S. military in Europe, Dr. Deni was also an adjunct lecturer at Heidelberg University’s Institute for Political Science. There, he taught graduate and undergraduate courses on U.S. foreign and security policy, the North Atlantic Treaty Organization (NATO), Europe­an security, and alliance theory and practice. Dr. Deni has spoken at conferences and symposia throughout Europe and North America. He is the author, editor, or co-editor of five books, including Alliance Management and Maintenance: Restructuring NATO for the 21st Century, and he has written several peer-reviewed monographs and journal articles. Dr. Deni holds degrees from the College of William & Mary, American University, and George Washington University.