Saving Nine: The Fight Against the Left's Audacious Plan to Pack the Supreme Court and Destroy American Liberty (Paperback) 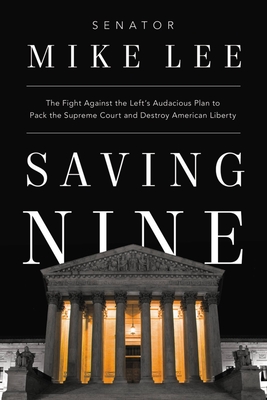 By Mike Lee
$18.99
Unavailable
Not Yet Published

NOW A NATIONAL BESTSELLER!
The left’s partisan push to pack the Supreme Court with liberal justices has fully migrated from the fringes into the mainstream of Democratic politics.

It wasn’t long ago that liberal icons, including the late Supreme Court Justice Ruth Bader Ginsburg, were against the idea of overhauling the court for political gain. But now, in the Biden era, more and more powerful Democrats are getting behind the cause, claiming the high court is broken and actively dismantling our democracy. Even Joe Biden—who once called court-packing a “bonehead idea”—gave in to the progressive wing of his party, appointing a committee to examine “reforms” to the court after being sworn in as president.

What changed? Mike Lee, a respected member of the Senate Judiciary Committee, reveals the answer to that question and warns of the dangerous norm-shattering precedent that would be set by politically motivated attempts to turn the Supreme Court into just another partisan weapon.

Mike Lee is a United States senator from Utah and a member of the Senate Judiciary Committee. Lee’s interest in the Supreme Court began when he was only ten years old and his father, the late Rex Edwin Lee—then serving as President Ronald Reagan’s solicitor general—started bringing the future senator with him when he argued cases before the Court.  After graduating from law school, Lee served as a law clerk to Associate Justice Samuel A. Alito, Jr., first on the U.S. Court of Appeals for the Third Circuit, and then on the Supreme Court.  Before entering politics, Lee served as an assistant U.S. attorney and later as general counsel to Utah Governor Jon M. Huntsman, Jr. During his years in private practice, he specialized in appellate and Supreme Court litigation.

“More timely than you ever dreamed of.”—Sean Hannity

"Outstanding...couldn't be more timely. Saving Nine, by certainly one of the smartest people in Congress, one of the most accomplished Constitutionalists as far as I'm concerned, and a dear friend. I encourage you to get it. It's so prescient...a terrific book."—Mark Levin