Artists Under Fire: The BDS War against Celebrities, Jews, and Israel (Hardcover) 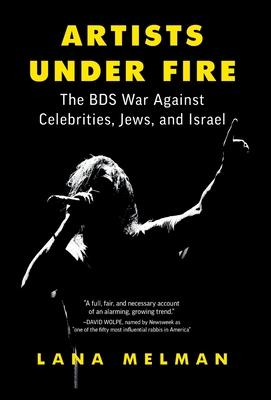 International entertainers of every color and creed are besieged by pressure to boycott Israel with an antisemitic smear tactic that spans the globe. Behind it all is the Boycott, Divestment, and Sanctions (BDS) campaign, an intimidation network masquerading as a human rights movement.

In Artists Under Fire, industry insider and activist Lana Melman puts BDS on trial. She exposes its strategy of using celebrities like Scarlett Johansson, Alicia Keys, Rihanna, the Rolling Stones, and more as pawns in its destructive crusade.

She calls out a vocal group of artists, led by Pink Floyd co-founder Roger Waters, who has joined the attack and created a star-studded battle between themselves and the thousands of musicians, filmmakers, and authors who refuse to be cowed.

Melman sounds the alarm about antisemitism's newest weapon and provides Israel's supporters with a step-by-step action plan to take it on. She also prods BDS followers to question the motives of their leaders, the company they are keeping, and the consequences of their actions.