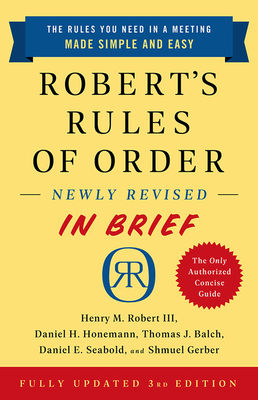 A short, concise and user-friendly guide to the essential procedures of conducting a meeting, written by the authors of Robert's Rules of Order Newly Revised, the only authorized edition of the classic work on parliamentary procedure

Originally published in 1876, General Henry M. Robert's guide to smooth, orderly, and fairly conducted meetings has sold over six million copies in eleven editions. Robert's Rules of Order is the book on parliamentary proceedings, yet those not well versed on what has now become a rather thick document can find themselves lost-and delayed-while trying to locate the most important rules. The solution? Robert's Rules of Order Newly Revised in Brief.

Written by the same authorship team behind the officially sanctioned Robert's Rules of Order, this short and user-friendly edition takes readers through the rules most often needed at meetings--from debates to amendments to nominations. With sample dialogues and a guide to using the complete edition, Robert's Rules of Order Newly Revised in Brief is the essential handbook for parliamentary proceedings.