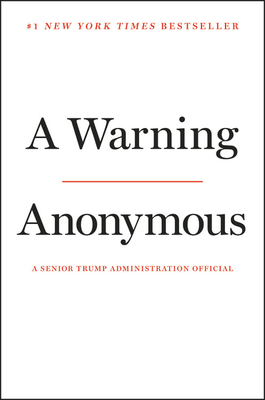 #1 New York Times and #1 Wall Street Journal bestseller: An unprecedented behind-the-scenes portrait of the Trump presidency from the anonymous senior official whose first words of warning about the president rocked the nation's capital.
On September 5, 2018, the New York Times published a bombshell essay and took the rare step of granting its writer anonymity. Described only as "a senior official in the Trump administration," the author provided eyewitness insight into White House chaos, administration instability, and the people working to keep Donald Trump's reckless impulses in check.

With the 2020 election on the horizon, Anonymous is speaking out once again. In this book, the original author pulls back the curtain even further, offering a first-of-its-kind look at the president and his record -- a must-read before Election Day. It will surprise and challenge both Democrats and Republicans, motivate them to consider how we judge our nation's leaders, and illuminate the consequences of re-electing a commander in chief unfit for the role.

This book is a sobering assessment of the man in the Oval Office and a warning about something even more important -- who we are as a people.

Described as "a senior official in the Trump administration," Anonymous offers a firsthand account of one of the most consequential presidencies in American history.

"A scathing portrait of a president and administration in chaos."—Susan Page, USA Today

"Alarming...What is most revealing about A WARNING is the warning it delivers about the Republican Party."—Amy Davidson Sorkin, The New Yorker

"There is no modern historical parallel."—Phil Rucker, The Washington Post

"Paints a chaotic picture of the administration."—Newsweek

"Anonymous has tales to tell...The writer does deliver...[A WARNING] stands to add fuel to the fire."—The Guardian

"A WARNING is full of revelations."—GQ Magazine