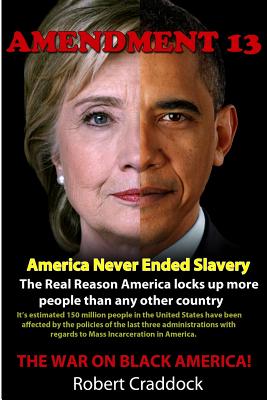 Amendment 13, exposes how prior administrations have mass incarcerated millions of people, 95% are considered nonviolent offenders. Starting with Bill Clinton, the Federal Prisons grew from 24 facilities to now 122. Inmates are forced into jobs in State and Federal Prison Industries operating Phone Rooms handling 411 calls, making clothing, furniture, and electronics and doing the day to day operations needed to manage the large prison complexes on a daily basis. Inmates are subjected to medical treatment being withheld, dangerous, unhealthy and unsanitary conditions, violence, sexual abuse and murder all within the prison system. The average person doesn't realize what is happening. The inmates caught up in this house of horrors feel like there is no one to get help from, until now. In 1860 America was engaged in a civil war that divided the country and went on for years. Overwhelmingly, Union soldiers were white. It was not until May 22, 1863 that the U.S. War Department established the Bureau of Colored Troops enabling black men to serve as soldiers. (Black men had been assisting the army in other official capacities such as constructing entrenchments or performing camp duty or other labor since the Second Confiscation and Militia Act of July 17, 1862.) By the end of the war, 178,975 enlisted men served in the U.S. Army as members of the U.S. Colored Troops. Because of this effort, Lincoln and the lawmakers put forth Amendment 13 to provide a prohibition on Slavery, only problem is Slavery was only ended for private citizens, the U.S. Government kept the ability to have U.S. citizens be slaves to the United States. In the language of the 13th Amendment, the sixth word in section 1 is "Except" this one word changes everything. Now, this book will explain why the U.S. Government along with all states has engaged in a practice of prosecuting everything to accomplish three goals: To generate an army of citizens to be forced to work as slave labor, earning a rate of .14 cents to .30 cents per hour. Two, to remove the citizens' rights to exercise their 2nd Amendment rights, (right to keep bear arms) and third, the 15th Amendment rights (Citizens of the United States right to vote.) With Hillary Clinton willingness to lie to the American public, the American citizens need to have all the facts leading up to the November elections. Now with the Presidential race heating up, American citizens need to know the truth and fully understand how this directly relates to the increase in police actions in minority communities and how the law enforcement agencies are increasing under pressure, to arrest more people to meet the demands of the Prison Industries needing Slave Labor to produce goods and services. Currently with this going public, President Obama is left with a dilemma to be the first black president to end slavery, or the first black president to not end slavery, either way, his presidential legacy will be defined on what he decides.

About the author: Robert Craddock has for 35 years been a business owner. In the past 20 years, has seen increasing challenges with respect to government regulation slowing down small business growth in this country. As of 2009, Robert has moved towards consulting positions, and has had the opportunity to work with international groups focused on home based business marketing. It's this relationship that has provided an awareness of the way the world community has viewed the United States and its leaders. Most business people if you ask are concerned over, the build-up of new regulations, government agencies and restrictions on conducting business overseas. In this current political season, so much is in question and the population to the media amazement has taken the position of "anyone other than the establishment" approach. What the media did not see happening was the American citizens are now awaking to the massive concerns the average person has over the direction of the United Stated government over the past 30 years and is looking for someone that can be honest, and start removing the buildup of government regulation and mass incarceration that has become common place.