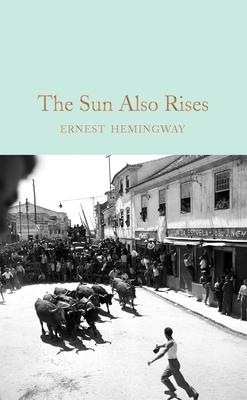 American Journalist Jake Barnes is desperately in love with the beautiful Lady Brett Ashley. She moves seductively through the seemingly glamorous milieu of American and British expats, loving, living and partying in Paris in the 1920's. They're a hedonistic generation, marked by the violence and privations of WW1, in pursuit of adventure.

Part of the Macmillan Collector’s Library; a series of stunning, cloth-bound, pocket-sized classics with gold foiled edges and ribbon markers. These beautiful books make perfect gifts or a treat for any book lover.

Ever restless, Jake and Lady Brett travel together with a disparate group of friends through France to Pamplona in Spain. There they are taken up by the vitality and the spectacle of the famous Fiesta of St Fermin. In a city famous for its bullfighting, Jake is plagued by jealousy and real love seems forever out of reach. The drama of the bullfighting is captured on the page by Hemingway with brutal realism in a remarkable novel that secured his place as an astonishing new writer and a voice for his generation.

Ernest Miller Hemingway was born in 1899. His father was a doctor and he was the second of six children. Their home was in Oak Park, a Chicago suburb.

In 1917 Hemingway joined the Kansas City Star as a cub reporter. The following year he volunteered to work as an ambulance driver on the Italian Front, where he was badly wounded but twice decorated for his services. In 1922 he reported on the Greco-Turkish War, then two years later resigned from journalism to devote himself to fiction.

Hemingway's international reputation was firmly secured by The Sun Also Rises, Men Without Women and A Farewell to Arms. He visited Spain during the Civil War and described his experiences in the bestseller For Whom the Bell Tolls. Hemingway was awarded the Nobel Prize for Literature in 1954, following the publication of The Old Man and the Sea. He died in 1961.