The Good Fight: The Feuds of the Founding Fathers (and How They Shaped the Nation) (Hardcover) 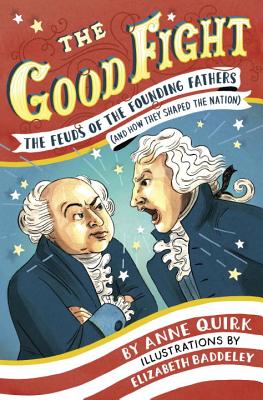 Can’t get enough of Hamilton? Think the British were the only ones we squabbled with during the Revolutionary War? Think again! A unique look at how the founding fathers settled their differences in their quest to settle a nation.

George Washington vs. King George. Benjamin Franklin vs. his son William. John Adams vs. Thomas Jefferson. Alexander Hamilton vs. everyone!

Join author Anne Quirk and illustrator Elizabeth Baddeley as they referee four fascinating historical throw-downs between the founding fathers . . . and prove that the United States of America is a place worth fighting for.

Anne Quirk was the publisher of the Horn Book Magazine and has worked for a number of book publishers in a number of ways. The daughter of two lawyers, the sister to seven siblings, and the mother of three children, she knows a lot about arguments. She studied history at Dartmouth College and lives in Belmont, Massachusetts.

Elizabeth Baddeley is not inclined to fight. She teaches design and is an illustrator whose previous work includes A Woman in the House (and Senate) by Ilene Cooper, Women Who Broke the Rules: Mary Todd Lincoln by Kathleen Krull, and I Dissent: Ruth Bader Ginsburg Makes Her Mark by Debbie Levy. She lives in Kansas City, Missouri. See more of her work at ebaddeley.com. Follow her on Twitter at @BizBeth.

“Want to make the story of our founding fathers relevant and interesting? One way is to produce a groundbreaking, award-winning Broadway rap musical. Another solution might be to offer this slim tome, a summary of four fractious early American relationships.”  -- Booklist

“Readers will be pleasantly surprised not only by the nuggets of history they’ll learn but also the lesson that heated debate isn’t necessarily bad – it can even be wildly productive.” -- School Library Journal