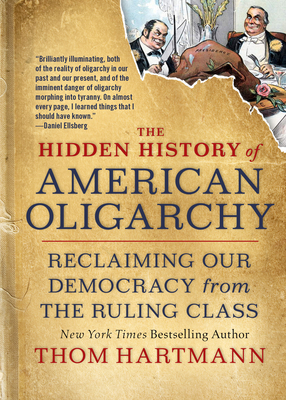 This is book number 5 in the The Thom Hartmann Hidden History Series series.

Thom Hartmann, the most popular progressive radio host in America and a New York Times bestselling author, looks at the history of the battle against oligarchy in America—and how we can win the latest round.

Billionaire oligarchs want to own our republic, and they're nearly there thanks to legislation and Supreme Court decisions that they have essentially bought. They put Trump and his political allies into office and support a vast network of think tanks, publications, and social media that every day push our nation closer and closer to police-state tyranny.

The United States was born in a struggle against the oligarchs of the British aristocracy, and ever since then the history of America has been one of dynamic tension between democracy and oligarchy. And much like the shock of the 1929 crash woke America up to glaring inequality and the ongoing theft of democracy by that generation's oligarchs, the coronavirus pandemic of 2020 has laid bare how extensively oligarchs have looted our nation's economic system, gutted governmental institutions, and stolen the wealth of the former middle class.

Thom Hartmann traces the history of this struggle against oligarchy from America's founding to the United States' war with the feudal Confederacy to President Franklin Roosevelt's struggle against "economic royalists," who wanted to block the New Deal. In each of those cases, the oligarchs lost the battle. But with increasing right-wing control of the media, unlimited campaign contributions, and a conservative takeover of the judicial system, we're at a crisis point.

Now is the time for action, before we flip into tyranny. We've beaten the oligarchs before, and we can do it again. Hartmann lays out practical measures we can take to break up media monopolies, limit the influence of money in politics, reclaim the wealth stolen over decades by the oligarchy, and build a movement that will return control of America to We the People.

Thom Hartmann is a four-time winner of the Project Censored Award, a New York Times bestselling author of thirty-two books, and America's #1 progressive talk radio show host. His show is syndicated on local for-profit and nonprofit stations and broadcasts nationwide and worldwide. It is also simulcast on television into nearly 60 million US and Canadian homes.

“With his awesome command of history and politics, Thom Hartmann presents a terrifying, captivating, and meticulously documented analysis of the treachery by which the ruthlessly deranged gained the loyalty of the desperate using money’s power to corrupt. An urgent and essential read for those who seek a world that works for all.” —David C. Korten, author of Change the Story, Change the Future

“Thom Hartmann’s must-read new book is equally frightening and inspiring. It offers both a dire warning about the threat posed to our nation by the growing power of oligarchs and a prescription on how to save our nation from it.” —Dean Obeidallah, host of The Dean Obeidallah Show, SiriusXM Radio

“Thom Hartmann has written a chilling account of how far our nation has strayed from democracy and is slowly embracing oligarchy. His focus on possible remedies, however, is the chief virtue of this fine book.” —Dan Sisson, author of The American Revolution of 1800

“For every American interested in protecting our democracy, everyone puzzled about how America came to the brink of authoritarian rule, and for all who enjoy a being educated and entertained by enthralling, eyeopening, riveting journey in U.S. history, the Hidden History of Oligarchy is a must read!” —Don Siegelman, former Governor of Alabama, author of Stealing Our Democracy

“Thom Hartmann shines a much-needed spotlight on the oligarchs’ brutal class war as it now crescendos in the Trump era. He makes clear that if we understand exactly what we’re up against, we can save our country, reject sociopathic greed and build an America that promotes shared prosperity.” —David Sirota, award-winning journalist and New York Times bestselling author

“I would gladly follow Thom Hartmann into hell.  I'd be unafraid because with Thom there, I knew the Devil's minions couldn't touch me.  I strongly cry huzzah for this latest course on teaching me what a Democracy is.” —Ed Asner

“This absolutely brilliant book is an empowering call to action, as well as a beautifully concise summary of the US’s historical battle to preserve democracy over repeated attempts by the oligarchy to create tyranny. A page-turning must read for all Americans at a time when tyranny’s claws are digging very deep.” —John Perkins, New York Times Bestselling Author

“Brilliantly illuminating of the reality of oligarchy in our past and our present and the imminent danger of oligarchy morphing into tyranny. On almost every page, I learned things that I should have known earlier as an American, but wasn't likely to find elsewhere. Urgently required reading if we are to advance toward democracy.” —Daniel Ellsberg,