The Hidden History of Big Brother in America: How the Death of Privacy and the Rise of Surveillance Threaten Us and Our Democr acy (The Thom Hartmann Hidden History Series #7) (Paperback) 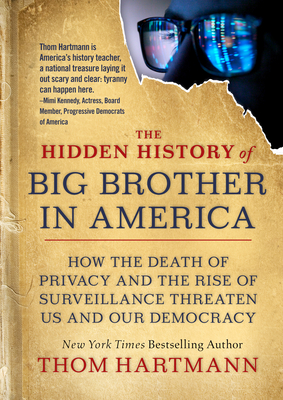 This is book number 7 in the The Thom Hartmann Hidden History Series series.

America’s most popular progressive radio host and New York Times bestselling author Thom Hartmann reveals how the government and corporate America misuse our personal data and shows how we can reclaim our privacy.

Most Americans are worried about how companies like Facebook invade their privacy and harvest their data, but many people don’t fully understand the details of how their information is being adapted and misused. In this thought-provoking and accessible book, Thom Hartmann reveals exactly how the government and corporations are tracking our every online move and using our data to buy elections, employ social control, and monetize our lives.

Hartmann uses extensive, vivid examples to highlight the consequences of Big Data on all aspects of our lives. He traces the history of surveillance and social control, looking back to how Big Brother invented whiteness to keep order and how surveillance began to be employed as a way to modify behavior. As he states, “The goal of those who violate privacy and use surveillance is almost always social control and behavior modification.”

Along with covering the history, Hartmann shows how we got to where we are today, how China—with its new Social Credit System—serves as a warning, and how we can and must avoid a similarly dystopian future. By delving into the Constitutional right to privacy, Hartmann reminds us of our civil right and shows how we can restore it.

Thom Hartmann is a four-time winner of the Project Censored Award, a New York Times bestselling author of thirty-three books, and America’s #1 progressive talk radio show host. His show is syndicated on local for-profit and nonprofit stations and broadcasts nationwide and worldwide. It is also simulcast on television into nearly 60 million US and Canadian homes.

“I learned so much from The Hidden History of Big Brother in America about the machinations of Facebook, the impacts of renter surveillance, and the harsh realities of racist facial recognition and data collection by the police and ICE. I learned how surveillance mechanisms have shapeshifted over the centuries, becoming ‘kinder and gentler’ but also more insidious. (I also learned that hyenas vote by sneezing!) Through crystal-clear, relatable prose and engaging narratives, Hartmann expertly chronicles how Big Data coercively shapes our lives to profit off us, control us, and punish us—under the guise of helping us. Hartmann’s urgent warning about the rise of the corporate-police state couldn’t be timelier.”
—Maya Schenwar, Editor-in-Chief, Truthout, author of Locked Down, Locked Out, and coauthor of Prison by Any Other Name

“Thom is a national treasure. Read him, embrace him, learn from him, and follow him as we all work for social change.”
—Robert Greenwald, political activist and founder and President, Brave New Films

“From the Bush years to the present, Thom Hartmann has been one of very few voices constantly willing to tell the truth.”
—Bill McKibben, author of Falter