The Platform Economy: How Japan Transformed the Consumer Internet (Paperback) 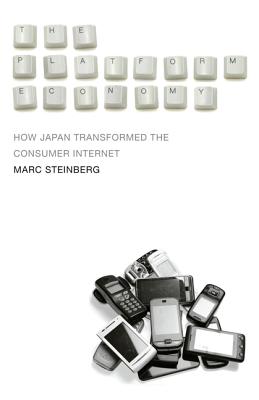 Platforms are everywhere. From social media to chat, streaming, credit cards, and even bookstores, it seems like almost everything can be described as a platform. In The Platform Economy, Marc Steinberg argues that the “platformization” of capitalism has transformed everything, and it is imperative that we have a historically precise, robust understanding of this widespread concept.

Taking Japan as the key site for global platformization, Steinberg delves into that nation’s unique technological and managerial trajectory, in the process systematically examining every facet of the elusive word platform. Among the untold stories revealed here is that of the 1999 iPhone precursor, the i-mode: the world’s first widespread mobile internet platform, which became a blueprint for Apple and Google’s later dominance of the mobile market. Steinberg also charts the rise of social gaming giants GREE and Mobage, chat tools KakaoTalk, WeChat, and LINE, and video streaming site Niconico Video, as well as the development of platform theory in Japan, as part of a wider transformation of managerial theory to account for platforms as mediators of cultural life.

Analyzing platforms’ immense impact on contemporary media such as video streaming, music, and gaming, The Platform Economy fills in neglected parts of the platform story. In narrating the rise and fall of Japanese platforms, and the enduring legacy of Japanese platform theory, this book sheds light on contemporary tech titans like Facebook, Google, Apple, and Netflix, and their platform-mediated transformation of contemporary life—it is essential reading for anyone wanting to understand what capitalism is today and where it is headed.

Marc Steinberg is associate professor of film studies at Concordia University, Montreal. He is author of Anime’s Media Mix: Franchising Toys and Characters in Japan (Minnesota, 2012) and its Japanese expanded version and translation Why is Japan a “Media Mixing Nation”? (Naze Nihon wa “media mikkusu suru kuni” nano ka). He is also coeditor of Media Theory in Japan.

"By relocating the origins of the platform economy to Japan’s consumer technology industries of the 1990s, Marc Steinberg offers a powerful intervention into current debates about platformization. This is a book that challenges us to think differently about the business and culture of digital media."—Ramon Lobato, author of Netflix Nations: The Geography of Digital Distribution

"Phenomenal. Marc Steinberg rewrites the history of the platform economy. Moving beyond an exclusive focus on Silicon Valley, he demonstrates that a crucial part of this history can be found in 1990s Japan. Steinberg deftly traces the emergence of platform theory and practices around Docomo’s i-mode, exploring intersections with U.S. and French discourse, and ending with the global markets forged by iOS and Android."—Thomas Poell, coauthor of The Platform Society: Public Values in a Connective World

"The American tech giants monopolize our attention in daily life; they also tend to hog the attention in technology criticism. Marc Steinberg offers a more expansive and nuanced analysis, showing that the ‘platform’ story did not begin in Silicon Valley and is not likely to end there. A rigorous, illuminating book."—Rebecca Tuhus-Dubrow, author of Personal Stereo