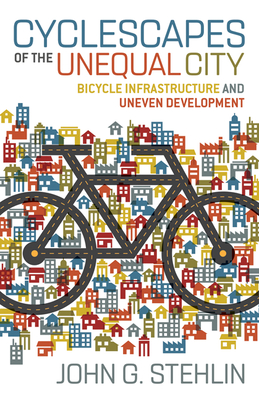 By John G. Stehlin
Email or call for price
Unavailable

Not long ago, bicycling in the city was considered a radical statement or a last resort, and few cyclists braved the inhospitable streets of most American cities. Today, however, the urban cyclist represents progress and the urban “renaissance.” City leaders now undertake ambitious new bicycle infrastructure plans and bike share schemes to promote the environmental, social, and economic health of the city and its residents. Cyclescapes of the Unequal City contextualizes and critically examines this new wave of bicycling in American cities, exploring how bicycle infrastructure planning has become a key symbol of—and site of conflict over—uneven urban development.

John G. Stehlin traces bicycling’s rise in popularity as a key policy solution for American cities facing the environmental, economic, and social contradictions of the previous century of sprawl. Using in-depth case studies from San Francisco, Philadelphia, and Detroit, he argues that the mission of bicycle advocacy has converged with, and reshaped, the urban growth machine around a model of livable, environmentally friendly, and innovation-based urban capitalism. While advocates envision a more sustainable city for all, the deployment of bicycle infrastructure within the framework of the neoliberal city in many ways intensifies divisions along lines of race, class, and space.

Cyclescapes of the Unequal City speaks to a growing interest in bicycling as an urban economic and environmental strategy, its role in the politics of gentrification, and efforts to build more diverse coalitions of bicycle advocates. Grounding its analysis in both regional political economy and neighborhood-based ethnography, this book ultimately uses the bicycle as a lens to view major shifts in today’s American city.

John G. Stehlin is research associate in the Sustainable Consumption Institute at the University of Manchester.

"In a strong wake-up call to current cycling policy in North American cities, John G. Stehlin gives us the best study yet of why the bicycle is failing to meet its emancipatory potential. Focusing on the San Francisco Bay Area, Detroit, and Philadelphia, he shows how business-friendly bike advocacy leads to an inequitable ‘cyclescape’ grounded in racialized disinvestment and green gentrification. Tracing developments from Critical Mass to wheelie crews, and from mobility-as-a-service to Vision Zero, this comparative study underlines how race, class, and gender are formed in relation to mobility practices in urban space. For anyone interested in mobility justice, this book is a necessary read."—Mimi Sheller, author of Mobility Justice: The Politics of Movement in an Age of Extremes

"Through rigorous empirical research and thoughtful analysis, John G. Stehlin illuminates the emergence of a complex politics of mobility that stems from the intersection of cycling and urban change."—Kathe Newman, Rutgers University

"This is an excellent investigation of the role of cycling in remaking of the street. With a close eye on the relationship between cycling and urban transformation in North America, John G. Stehlin offers a lucid and important analysis of how cycling becomes caught up in exclusionary relations between race, gentrification, and the city. Cycling becomes an infrastructure of both sustainability and economic exclusion. Yet, as Stehlin shows, it can also become part of a more hopeful and progressive politics for the city."—Colin McFarlane, Durham University