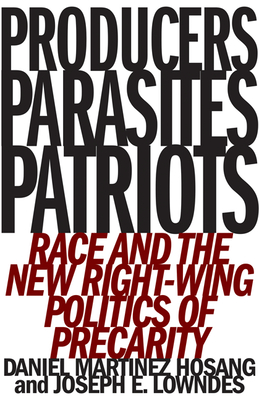 The profound concentration of economic power in the United States in recent decades has produced surprising new forms of racialization. In Producers, Parasites, Patriots, Daniel Martinez HoSang and Joseph E. Lowndes show that while racial subordination is an enduring feature of U.S. political history, it continually changes in response to shifting economic and political conditions, interests, and structures.

The authors document the changing politics of race and class in the age of Trump across a broad range of phenomena, showing how new forms of racialization work to alter the economic protections of whiteness while promoting some conservatives of color as models of the neoliberal regime. Through careful analyses of diverse political sites and conflicts—racially charged elections, attacks on public-sector unions, new forms of white precarity, the rise of black and brown political elites, militia uprisings, multiculturalism on the far right—they highlight new, interwoven deployments of race in the ascendant age of inequality. Using the concept of “racial transposition,” the authors demonstrate how racial meanings and signification can be transferred from one group to another to shore up both neoliberalism and racial hierarchy.

From the militia movement to the Alt-Right to the mainstream Republican Party, Producers, Parasites, Patriots brings to light the changing role of race in right-wing politics.

Daniel Martinez HoSang is associate professor at Yale University appointed in the American Studies and Ethnicity, Race, and Migration programs. He is author of Racial Propositions: Ballot Initiatives and the Making of Postwar California.

Joseph E. Lowndes is associate professor of political science at the University of Oregon. He is author of From the New Deal to the New Right: Race and the Southern Origins of Modern Conservatism.