Archives of Infamy: Foucault on State Power in the Lives of Ordinary Citizens (Paperback) 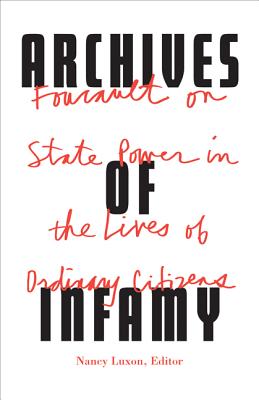 
What might it mean for ordinary people to intervene in the circulation of power between police and the streets, sovereigns and their subjects? How did the police come to understand themselves as responsible for the circulation of people as much as things—and to separate law and justice from the maintenance of a newly emergent civil order? These are among the many questions addressed in the interpretive essays in Archives of Infamy.

Crisscrossing the Atlantic to bring together unpublished radio broadcasts, book reviews, and essays by historians, geographers, and political theorists, Archives of Infamy provides historical and archival contexts to the recent translation of Disorderly Families by Arlette Farge and Michel Foucault. This volume includes new translations of key texts, including a radio address Foucault gave in 1983 that explains the writing process for Disorderly Families; two essays by Foucault not readily available in English; and a previously untranslated essay by Farge that describes how historians have appropriated Foucault.

Archives of Infamy pushes past old debates between philosophers and historians to offer a new perspective on the crystallization of ideas—of the family, gender relations, and political power—into social relationships and the regimes of power they engender.

Nancy Luxon is associate professor of political science at the University of Minnesota. She is author of Crisis of Authority: Politics, Trust, and Truth-Telling in Freud and Foucault and editor of Disorderly Families (Minnesota, 2016).

"Listening to the voices rising from the archives, grasping the distant echoes of confrontations with power, exhuming the tenuous grain of tiny existences—this is what Michel Foucault chose to do. Does the philosopher’s gesture conflict with the historical understanding of archival material? This look back at an exciting debate asks: is it possible to build together a concern for anonymous lives, a literary passion for documentary fragments, and the desire to make a history of the discourses and practices of power?" —Judith Revel, Université Paris Nanterre