Signs In The Heavens and On The Earth: Man's Days are Numbered...and he is Measured (Paperback) 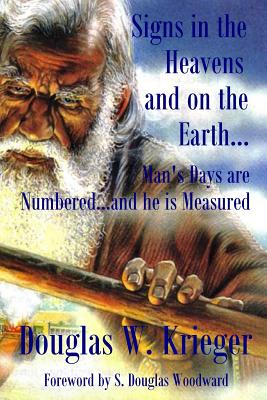 This fourth edition of SIGNS IN THE HEAVENS & ON THE EARTH...Man's Days Are Numbered and He Is Measured has added to its title: He Is Measured - in that the entire text subjectively incorporates the dimensions of Paradise to be that of the Bride of Messiah comprised of both the Divine and the human in eternal bliss but measured as a Holy City: "Come, I will show you the Woman, the Lamb's Bride . . . And he carried me away in the Spirit to a great and high mountain, and showed me the Holy City, Jerusalem" (Rev. 21:9-10). . . "And he who talked with me had a gold reed the Hebrew "reed" or "rod" is some 12.6 ft.] to measure the city, its gates, and its wall. The city is laid out a square; its length is as great as its breadth. And he measured the city with the reed: twelve thousand furlongs. Its length, breadth, and height are equal. Then he measured its wall: one hundred and forty-four cubits, according to the measure of a man, that is, of an angel" (Rev. 21:9-10, 15-17).Ancient measurements and/or units of measure are comprised, in essence, of numbers. They proportionately reflect the primary dimensions of earth, the moon and the sun-and even the grandeur of the universe. Metrology is the science of measurement and/or dimension. We affirm that there is, as discovered by the ancients, a "code of number" which repeatedly replicates itself in ratio and/or in direct proportion within astronomy, mathematics-geometry, music, a multitude of ancient monuments and, in particular, biblical objects, chemistry, the arts and even the social order as was the case with Plato's discourse regarding Optimal Societal Harmony relative to his ideal Magnesia, juxtaposed to the antithesis of harmony and universal equilibrium, Atlantis. As Magnesia is to the New Jerusalem, so is Babylon the Great to that of Atlantis. There is either "order in the universe" as seen in the "Dimensions of Paradise"-i.e., the Holy City of Ezekiel and the Holy City, New Jerusalem or there is "chaos" - the City of Confusion is ultimately the City of Destruction and Desolation. It is our stalwart conviction that the triumph of good over evil is the highest expression of humanity's original design and is, therefore, the providential will of the Creator to effect both the recovery and the prosperity of His original intent that man-male and female-shall partake of the Tree of Life and by so doing fulfill the Divine Design to be in relationship with the Creator in fullness.This book sets out on a "dimensional journey" which has greatly expanded over its original cover some 40,000 words in taking the supreme measurements throughout antiquity, along with those chronological and dimensional mysteries embedded in Holy Writ-especially those surrounding the "times and seasons" of the Son of Man-and woven them into a persistent pattern from the Garden to Paradise as the supreme and absolute means of the Creator in communicating to us the Divine Intention of the Ages in preparing the pinnacle of His creation, man, to be His ultimate reflection in eternal relationship with the Creator of the Universe.Without equivocation-this writing is both prophetically and numerically challenging. It surfaced not in the category of theology/eschatology but in measurement/mensuration (geometric dimensions). It became the #1 best seller outside the bounds of religiosity-however, its greatest contribution to Christianity is its absolute manipulation of the Judeo-Christian use of "number" be it in "times and seasons" - chronologies, divinely designed objects like Noah's Ark, the Ark of the Covenant, Tabernacles and Temples - eventually, the "numbers" demand a "multidimensional" comprehension of the Holy City, Jerusalem, such as Ezekiel's Vision of the Holy District and John the Beloved's view of the New Jerusalem; and finally, in the precision of number found in eschatology.You will never read the Book of books again the same way--it will mathematically & dimensionally come alive.

Doug Krieger is the co-author of the controversial blockbuster text, THE FINAL BABYLON, with co-authors S. Douglas Woodward and Dene McGriff and UNCOMMON SENSE with S. Douglas Woodward. SIGNS IN THE HEAVENS & ON THE EARTH...Man's Days Are Numbered and he is Measured . . . has been the #1 Best Seller for over a year in Science/Math/Measurement & Mensuration Categories on Amazon. He is a board member of both THE PROPHECY FORUM and URBAN HOPE CHRISTIAN ALLIANCE. His new Magnum Opus, THE TWO WITNESSES, was published in the fall of 2014 (two volumes). He is also the co-author of BLOOD ON THE ALTAR, along with 11 other authors. THE TESTIMONY OF JESUS...Why the Rapture of the Church Matters...will be out in the summer of 2015. He is a former education administrator for public schools and was for many years involved in public relations work. He was graduated from California State University, Los Angles and post-graduate work at CSUS/Sacramento in Education Administration. Former elder/pastor during the Jesus Movement in Berkeley California and is a conference speaker at both prophetic and educational seminars. His expertise is on "timelines" and Bible Prophecy, as well as biblical numbers and how they relate to the Neolithic Earth and to the Dimensions of Paradise. Doug is currently involved with Urban Hope Christian Alliance in Sacramento, California and was the co-editor of The Tribulation Network for the past 12 years where his articles still appear. Likewise, World Mysteries is one of the many sites which carry his material. Doug is now the editor of TRIBNET.ORG which is also a major blog on the aforementioned topics. Doug also speaks on the ramifications of the geopolitical world as it pertains to Bible Prophecy and the "Time of the End." A new text, THE 12 WARS OF HEAVEN AND EARTH will be released in 2015-16 and will continue to highlight the themes echoed in his other publications. He has over 50 videos available on line at The Tribulation Network. His voice can be heard all over Blog Talk Radio and his articles and graphics seen all over the internet by simply searching for his name. He lives in Northern California with his loving wife, Deborah, and has three happily married children with several grandchildren who are committed Christians as well. He can be reached via www.tribnet.org