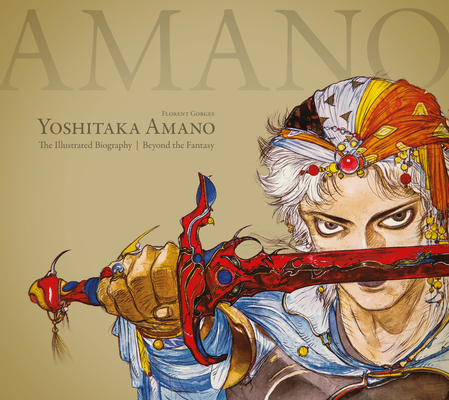 A beautiful celebration of the life and imagery of Japan's master of fantasy and science fiction art! This handsome, landscape-style hardback contains nearly 400 illustrations and photos from the incredible career of Final Fantasy designer Yoshitaka Amano.

But Beyond the Fantasy covers far more than just the famous game series. Amano's artistic journey goes back to his first job in 1967--age 15, working on Speed Racer! From animator, to illustrator, to internationally exhibited painter, this biography is a look not only into the work of Amano's life, but the influences, techniques, philosophy, and family that have nurtured it.

Yoshitaka Amano was born in 1952 in Shizuoka, Japan, the youngest child of a WWII veteran who worked in the traditional Japanese lacquer ware arts. Amano went pro in 1967 at the age of 15, as the youngest person to be hired by legendary anime studio Tatsunoko, where his first job was on the famous anime series Speed Racer. By 17, he had been made the studio's character concept artist, a new kind of industry position created specifically for him.

Well-known anime characters designed by Amano in the 1970s include the cast of Gatchaman, also known as Battle of the Planets--of whom superstar comics painter and Gatchaman fan Alex Ross (Kingdom Come) has said, "They belong among the pantheon of great characters." In the 1980s, Amano designed the cast of Genesis Climber Mospeada, known to fans around the world as the third part of the TV series Robotech (Robotech: The New Generation). In 1985 Amano partnered with director Mamoru Oshii (Ghost in the Shell) and Hayao Miyazaki's early producer Hideo Ogata to create the feature-length The Angel's Egg, often considered the most personal of Oshii's anime films.

In the 1980s, Amano began to develop an independent career as one of Japan's most sought-after character and design illustrators, painting hundreds of science fiction and fantasy magazine book covers. His mysterious, atmospheric style attracted the creators of a new video game concept in 1987 called Final Fantasy, who hired Amano to give a distinctive artistic vision to the game. Amano would go on to design the characters, monsters, weapons, and treasures of the first ten Final Fantasy games, visually influencing a worldwide fan base through the new frontier of video games, as he had earlier done through the medium of anime.

While remaining in high demand as a commercial illustrator, Amano entered the fine arts world beginning in 1989 with his first exhibition of original art in Tokyo, and in 1995 his first outside Japan, at the Biennale d'Orléans in France. In 1997 he made his New York art world debut with the exhibit Think Like Amano, and the following year worked with the Los Angeles Philharmonic to create the animated concert film 1001 Nights. A fan of US comic books since he discovered Neal Adams in the 1960s, Amano's New York exhibit led to his first work in American comics, when he was asked to create a poster for the 10th anniversary of Sandman, a project that put him in touch with Neil Gaiman, with whom he would collaborate on Sandman: The Dream Hunters; for Marvel, he would create Elektra & Wolverine: The Redeemer with Greg Rucka.

Maintaining studios today in Paris and Tokyo and travelling frequently to international events, in the 21st century Amano continues to take on commissions, while devoting the majority of his working time to personal projects. In 2013, Dark Horse Comics, which has released over 40 books illustrated by Amano, was the first in the world to publish Yoshitaka Amano's debut original novel, Deva Zan, containing dozens of accompanying paintings. Dark Horse is proud to honor the continuing legacy of one of the world's most influential Japanese artists through its upcoming English edition of Florent Gorges's Yoshitaka Amano: Beyond the Fantasy--The Illustrated Biography.