The Anti-Mary Exposed: Rescuing the Culture from Toxic Femininity (Hardcover) 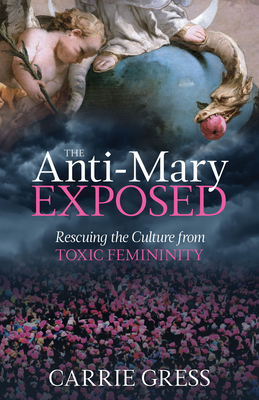 The Demonic Influence on Women Today
In the late '60s, a small group of elite American women convinced an overwhelming majority of the country that destroying the most fundamental of relationships--that of mother and child--was necessary for women to have productive and happy lives. From the spoiling of this relationship followed the decay of the entire family, and almost overnight, our once pro-life culture became pro-lifestyle, embracing everything that felt good. Sixty million abortions later, women aren't showing signs of health, happiness, and fulfillment. Increased numbers of divorce, depression, anxiety, sexually transmitted disease, and drug abuse all point to the reality that women aren't happier, just more medicated. Huge cultural shifts led to a rethinking of womanhood, but could there be more behind it than just culture, politics, and rhetoric? Building off the scriptural foundations of the anti-Christ, Carrie Gress makes an in-depth investigation into the idea of an anti-Mary--as a spirit, not an individual--that has plagued the West since the '60s. Misleading generations of women, this anti-Marian spirit has led to the toxic femininity that has destroyed the lives of countless men, women, and children. Also in The Anti-Mary Exposed:
The antidote to the anti-Mary is, of course, Mary, the Mother of God, known widely as the most powerful woman in the world and the source of the belief that women ought to be treated with dignity. She is a beacon of all the virtues and qualities--purity, humility, kindness, beauty--that oppose this sinister force that has cast its spell upon so many women. Mary's influence is unparalleled by any woman in history. She is the perfect model of Christian femininity, who desires to be a spiritual mother to us all, leading us to her Son, and to the fulfillment of our heart's deepest desires.

Carrie Gress is a Fellow at The Ethics and Public Policy Center and a Scholar at The Institute for Human Ecology at Catholic University of America. She is a prolific writer and author of several books, including The Marian Option, The Anti-Mary Exposed, and Theology of Home. She and her husband, and five children, live in Virginia. She is also the editor of the online Catholic women's magazine, TheologyofHome.com.