Do What They Say or Else (Paperback) 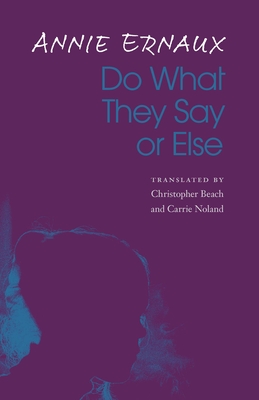 Winner of the 2022 Nobel Prize in Literature

Originally published in 1977, Do What They Say or Else is the second novel by French author Annie Ernaux. Set in a small town in Normandy, France, the novel tells the story of a fifteen-year-old girl named Anne, who lives with her working-class parents. The story, which takes place during the summer and fall of Anne’s transition from middle school to high school, is narrated in a stream-of-consciousness style from her point of view. Ernaux captures Anne’s adolescent voice, through which she expresses her keen observations in a highly colloquial style.

As the novel progresses and Anne’s feelings about her parents, her education, and her sexual encounters evolve, she grows into a more mature but also more conflicted and unhappy character, leaving behind the innocence of her middle school years. Not only must she navigate the often-confusing signals she receives from boys, but she also finds herself moving further and further away from her parents as she surpasses their educational level and worldview.

Annie Ernaux, winner of the 2022 Nobel Prize in Literature, was born in 1940 in Lillebonne, France. Her novels have won many awards and recognitions, including the 2008 Marguerite Duras Prize and the Prix Renaudot, and three of her novels have been named New York Times Notable Books. She is also the author of Things Seen (Nebraska, 2010). Christopher Beach is an independent scholar and translator who has written and edited books on both literature and film, including Claude Chabrol: Interviews. Carrie Noland is a professor of French literature and comparative literature at the University of California–Irvine and has published translations of Aimé Césaire, Éric Suchère, and Édouard Glissant.

"A powerful portrait of a searching adolescent."—Publishers Weekly

“In this, her second published novel, Annie Ernaux writes the psycho-biology of being fifteen years old with perfect recall. Do What They Say or Else conveys the cost of upward mobility and the desire to just throw it all away. Ernaux is in perfect control of her narrator’s wildness. The result is vivid and tough.”—Chris Kraus, author of After Kathy Acker: A Literary Biography

“Annie Ernaux is often celebrated for her minimalist and documentary style. Yet this second novel, very funny at times, is narrated from the perspective of a teenage girl, with a vindictive and self-deprecating tone that ranges from the colloquial to the outright vulgar. This translation is a true tour de force!”—Bruno Thibault, author of Danièle Sallenave et le don des morts