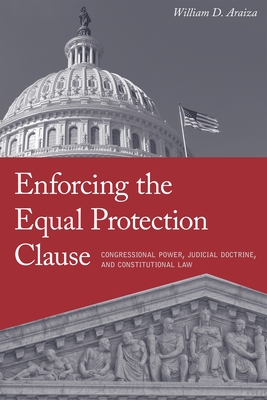 For over a century, Congress's power to enforce the Fourteenth Amendment's guarantee of "the equal protection of the laws" has presented judges and scholars with a puzzle. What does it mean for Congress to "enforce" such a wide-ranging, open-ended provision when the Supreme Court has insisted on its own superiority in interpreting the Fourteenth Amendment? In Enforcing the Equal Protection Clause, William D. Araiza offers a unique understanding of Congress's enforcement power and its relationship to the Court's claim to supremacy when interpreting the Constitution. Drawing on the history of American thinking about equality in the decades before and after the Civil War, Araiza argues that congressional enforcement and judicial supremacy can co-exist, but only if the Court limits its role to ensuring that enforcement legislation reasonably promotes the core meaning of the Equal Protection Clause. Much of the Court's equal protection jurisprudence stops short of stating such core meaning, thus leaving Congress free (subject to appropriate judicial checks) to enforce the full scope of the constitutional guarantee. Araiza's thesis reconciles the Supreme Court's ultimate role in interpreting the Constitution with Congress's superior capacity to transform the Fourteenth Amendment's majestic principles into living reality. The Fourteenth Amendment's Enforcement Clause raises difficult issues of separation of powers, federalism, and constitutional rights. Araiza illuminates each of these in this scholarly, timely work that is both intellectually rigorous but also accessible to non-specialist readers.

William D. Araiza is Professor of Law and Dean of Brooklyn Law School and the author of Enforcing the Equal Protection Clause (NYU, 2016), Animus: A Brief Introduction to Bias in the Law (NYU, 2017), and Rebuilding Expertise: Creating Effective and Trustworthy Regulation in an Age of Doubt (forthcoming, 2022).