The Difference Aesthetics Makes: On the Humanities "After Man" (Hardcover) 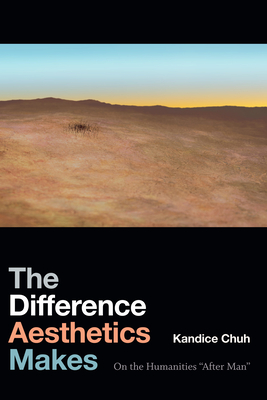 In The Difference Aesthetics Makes cultural critic Kandice Chuh asks what the humanities might be and do if organized around what she calls "illiberal humanism" instead of around the Western European tradition of liberal humanism that undergirds the humanities in their received form. Recognizing that the liberal humanities contribute to the reproduction of the subjugation that accompanies liberalism's definition of the human, Chuh argues that instead of defending the humanities, as has been widely called for in recent years, we should radically remake them. Chuh proposes that the work of artists and writers like Lan Samantha Chang, Carrie Mae Weems, Langston Hughes, Leslie Marmon Silko, Allan deSouza, Monique Truong, and others brings to bear ways of being and knowing that delegitimize liberal humanism in favor of more robust, capacious, and worldly senses of the human and the humanities. Chuh presents the aesthetics of illiberal humanism as vital to the creation of sensibilities and worlds capable of making life and lives flourish.

Kandice Chuh is Professor of English and American Studies at The Graduate Center, City University of New York, author of Imagine Otherwise: On Asian Americanist Critique, and coeditor of Orientations: Mapping Studies in the Asian Diaspora, both also published by Duke University Press.