Hope and Hard Truth: A Life in Texas Politics (Hardcover) 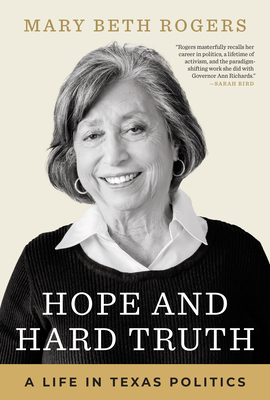 Mary Beth Rogers has led an eventful life rooted in the weeds of Texas politics, occasionally savoring a few victories—particularly the 1990 governor’s race when, as campaign manager for Ann Richards, she did the impossible and put a Democratic woman in office. She also learned to absorb her losses—after all, she was a liberal feminist in America’s most aggressively conservative state.

Rogers’s road to a political life was complex. Candidly and vulnerably, she shares both public and private memories of how she tried to maintain a rich family life with growing children and a husband with a debilitating illness. She goes on to provide an insider’s account of her experiences as Richards’s first chief of staff while weaving her way through the highs and lows of political intrigue and legislative maneuvering.

Reflecting on her family heritage and nascent spiritual quest, Rogers discovers a reality at once sobering and invigorating: nothing is ever completely lost or completely won. It is a constant struggle to create humane public policies built on a foundation of fairness and justice—particularly in her beloved Texas.

Mary Beth Rogers served as Ann Richards's campaign manager and chief of staff, a television executive, college professor, and government official. She is the author of several books, including Barbara Jordan: American Hero, and Turning Texas Blue: What It Will Take to Break the GOP Grip on America’s Reddest State.

Player. Witness. Historian. Soothsayer. Mary Beth Rogers is a wise and talented woman whose uncanny intellectual rigor is accompanied by a warmth she has paid for in full. What emerges from Hope and Hard Truth is the humanity of Rogers, and the connections among the underpinning human drives and snares and glories threading through all the stories she tells. Stories that start at home.
— Holland Taylor, award-winning actress and playwright

It's fitting that a woman whose career started by uncovering the untold stories of women who made history has become one of those women. If not for Mary Beth Rogers, you may only remember Ann Richards as the funniest teacher you’d ever met. And if not for this book, you would never understand how liberals once ran Texas. People here like to say, 'God bless Texas.' I say God already did, when we got Mary Beth Rogers.
— Jason Stanford, coauthor of Forget the Alamo: The Rise and Fall of an American Myth

In her sublime memoir Hope and Hard Truth, Mary Beth Rogers masterfully examines Texas politics through the highly compelling lens of her lifetime of activism and the paradigm-shifting work she did with Governor Ann Richards. Rogers’s deep dive into some of the hard truths of Texas politics remains not only astonishingly relevant today but provides precious glimmers of hope that the partisan madness currently tearing our country apart can be overcome. Her account of how she made peace with past battles offers profound insights for all of us trying to forge a more contemplative future.
— Sarah Bird, award-winning novelist and author of A Love Letter to Texas Women

Rogers emerges as an honest, forthright storyteller, devoted to her state and grateful for those who supported her during her long, fruitful career...Rogers has witnessed and participated in the transformation of her state, and she writes movingly about those influences on her. [Hope and Hard Truth is] a combination of earnest personal reflection and useful documentation of Texas political history and its big personalities.
— Kirkus

Rogers memorably illuminates crucial passages of Texas liberal history...Rogers’ prose is so good-natured and pleasant to read, it’s a bit like sitting on the porch with a wise friend, savoring a pitcher of hibiscus iced tea until the fireflies emerge...Hope and Hard Truth [is] far more than a memoir. It’s a teaching guide for citizen students of Texas politics—a syllabus of movements to study, unsung heroes to know, and actions to take that could potentially activate a blue wave.
— Texas Observer

[Hope and Hard Truth] is a reflective memoir of a time when patient, rational, progressive politics seemed to have a real chance to mold a different future for all Texans. Mary Beth Rogers, Ann Richards, and their generational cohort did what they could to lay a foundation for a more inclusive, generous, and productive Texas. That work will have to be built upon by those who have followed.
— Austin Chronicle