If I Survive: Frederick Douglass and Family in the Walter O. Evans Collection (Paperback) 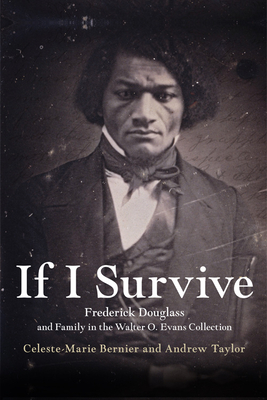 While the many public lives of Frederick Douglass - as the representative 'fugitive slave', autobiographer, orator, abolitionist, reformer, philosopher and statesman - are lionised worldwide, If I Survive sheds light on the private life of Douglass the family man. For the first time, this book provides readers with a collective biography mapping the activism, authorship and artistry of Douglass and his sons, Lewis Henry, Frederick Jr. and Charles Remond Douglass. In one volume, the history of the Douglass family appears alongside full colour facsimile reproductions of their over 80 previously unpublished speeches, letters, autobiographies and photographs held in the Walter O. Evans Collection. All of life can be found within these pages: romance, hope, despair, love, life, death, war, protest, politics, art, and friendship. Working together and against a changing backdrop of US slavery, Civil War and Reconstruction, the Douglass family fought for a new 'dawn of freedom'.

Marking the 200th anniversary of Frederick Douglass' birth, this first collective history and comprehensive collection of the Douglass family writings and portraits sheds new light not only on Douglass as a freedom-fighter and family man but on the lives and works of Lewis Henry, Frederick Jr., and Charles Remond. As civil rights protesters, essayists, autobiographers, and orators in their own right, they each played a vital role in the 'struggles for the cause of liberty' of their father. As published here, each of their original writings and portraits is accompanied by an explanatory essay and in-depth scholarly annotatations as well as a detailed bibliography.

Recognising that the Frederick Douglass that is needed in a twenty-first century Black Lives Matter era is no infallible icon but a mortal individual, If I Survive situates the lives and works of Douglass and his family within the social, political, historical and cultural contexts in which they lived and worked. Each unafraid to die for the cause, they dedicated their lives to the emancipation of the slave and to social justice by every means necessary.

The Foreword is written by Robert S. Levine and the Afterword is authored by Kim F. Hall.

Celeste-Marie Bernier is Professor of Black Studies and Personal Chair in English Literature at the University of Edinburgh. She is the author of African American Visual Arts; Characters of Blood: Black Heroism in the Transatlantic Imagination; Suffering and Sunset; World War I in the Art and Life of Horace Pippin; Stick to the Skin: African American and Black British Art (1965-2015). Andrew Taylor is Senior Lecturer in English Literature at the University of Edinburgh. He is the author of Henry James and the Father Question (2002), Thinking America: New England Intellectuals and the Varieties of American Experience (2010), co-author of Thomas Pynchon (2013) and co-editor of If I Survive: Frederick Douglass and Family in the Walter O. Evans Collection (EUP, 2018). He co-edits the book series Interventions in Nineteenth-Century American Literature and Culture.