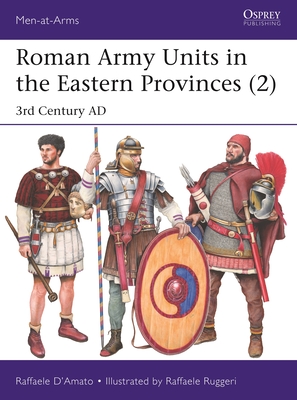 Drawing upon the latest literary and archaeological research, this is an in-depth study of the Roman Army units based in the Eastern Provinces during the turbulent third century of the Roman Empire.

In this book, eminent Roman historian, Dr Raffaele D'Amato, looks at the notoriously under-represented history of the Roman armies during the middle 3rd Century whose records have been obscured by the chaotic civil wars of that period between usurpers to the Imperial authority of Rome. Following on from the previous title, MAA 527, Roman Army Units in the Western Provinces (2): 3rd Century AD, this book considers the evidence for troops in the Eastern half of the Empire specifically around the Balkans, Mesopotamia, the Middle East and North Africa and looks at the weakness of Imperial central authority which inevitably led to local particularism and a wide range of appearance in regional commands.

Dr D'Amato uses literary, painted, sculptural and archaeological sources to reconstruct this little-understood period of Roman military history and, with the aid of meticulous coloured artwork, photos and detailed charts, reconstructs the appearance and campaigns of the Roman forces stationed in the East.

Raffaele D'Amato, PhD, is the author of some 40 books and has written numerous articles on the Roman Empire, Byzantium, medieval Europe and the military of Ancient Greece. He has taught at the University of Ferrara, and was a visiting professor at Fatih University, Istanbul. He currently lives in England, working as an archaeological consultant and lawyer for Timeline Auctions Ltd of Harwich, and also as an external researcher for the Laboratory of the Danubian Provinces at the University of Ferrara.

Raffaele Ruggeri was born in Bologna where he still works and lives. After studying at the Fine Arts Academy, he worked in several areas of graphics and design before deciding to devote himself to illustration. He has long been interested in military history and has illustrated a number of books for Osprey including MAA 547, Roman Army Units in the Eastern Provinces (2) and CBT 55, Roman Legionary vs Gallic Warrior.