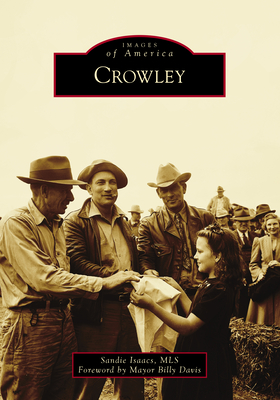 Established around 1848 as Deer Creek Settlement, Crowley grew from a small pioneering community just south of Fort Worth, Texas.

When Galveston, Colorado & Santa Fe Railroad Company constructed a rail line during the 1870s connecting Cleburne to Fort Worth, the settlement relocated about a mile west. The first train ran through Crowley on December 8, 1881. An integral part of Crowley's growth, the railroad provided ease of shipping cattle and crops and access to transportation. Cattle were either loaded on to railcars or unloaded and sent directly to stock pens. From there they went straight to an auction barn. A feed mill was built, and grocery and hardware stores soon opened. Records indicate that the first post office was housed in Hayes Brothers General Store and opened in 1883. Crowley was officially on the map as a thriving town. By the end of the 20th century, Crowley boasted approximately 8,000 residents. Since then, the population size has doubled.

Sandie Isaacs, MLS, community engagement librarian, works for the Crowley Public Library. She holds a bachelor's degree in education and a master's degree in library information studies. Images used in this book are from The Portal to Texas History, Fort Worth Star-Telegram Collections, Special Digital Collections Library from the University of Texas at Arlington, and citizens of Crowley who shared family photographs.