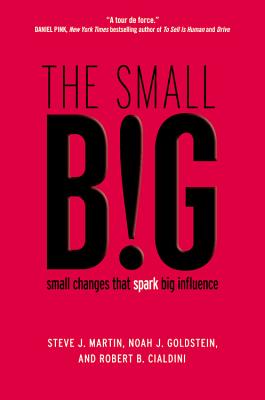 At some point today you will have to influence or persuade someone - your boss, a co-worker, a customer, client, spouse, your kids, or even your friends. What is the smallest change you can make to your request, proposal or situation that will lead to the biggest difference in the outcome?
In The small BIG, three heavyweights from the world of persuasion science and practice -- Steve Martin, Noah Goldstein and Robert Cialdini -- describe how, in today's information overloaded and stimulation saturated world, increasingly it is the small changes that you make that lead to the biggest differences.
In the last few years more and more research - from fields such as neuroscience, cognitive psychology, social psychology, and behavioral economics - has helped to uncover an even greater understanding of how influence, persuasion and behavior change happens. Increasingly we are learning that it is not information per se that leads people to make decisions, but the context in which that information is presented.
Drawing from extensive research in the new science of persuasion, the authors present lots of small changes (over 50 in fact) that can bring about momentous shifts in results. It turns out that anyone can significantly increase his or her ability to influence and persuade others, not by informing or educating people into change but instead by simply making small shifts in approach that link to deeply felt human motivations.

Steve J. Martin is the director of INFLUENCE AT WORK in the United Kingdom, and his work has been featured in the New York Times, Los Angeles Times and Wired. His regular business columns for the Harvard Business Review and the British Airways in-flight magazine are read by over 2.5 million people each month.

Noah J. Goldstein is a professor at the UCLA Anderson School of Management, where he has won awards for both teaching and research. His previous book, Yes!, co-authored with Martin and Cialdini, is a New York Times bestseller translated in over 25 languages. Goldstein has also served on the Scientific Advisory Boards of two Fortunate Global 500 companies.

Robert B. Cialdini is Regents' Professor Emeritus of Psychology and Marketing at Arizona State University. He is also president of INFLUENCE AT WORK. Harvard Business Review calls Dr. Cialdini "the leading social scientist in the field of influence." His book Influence, was named by Inc. magazine as one of the Top 10 Marketing Books of All Time and has been published in twenty-eight languages. Influence is a New York Times bestseller and has sold over 2 million copies.

"Not to be missed."—Fortune Magazine

"The Small BIG is a fun, educational and entertaining read. You'll experience some brain bending in the process, you'll pick up some tips and strategies and ultimately, grow your influence muscle to a point where your results will shine."—Small Business Trends

"Want to be a better negotiator? Have more productive meetings? Get the kids to eat more vegetables? The small BIG provides a set of simple, powerful tools for anyone who wants to be more persuasive."—- Jonah Berger, Professor at the Wharton School and Bestselling Author of Contagious: Why Things Catch On

"If you've ever struggled to change the beliefs or behaviors of other people, there's hope. The small BIG offers the best of science and practical insights from the world's leading experts on persuasion. Everyone who cares about influence will be reading this riveting book."—- Adam Grant, Wharton professor and bestselling author of GIVE AND TAKE

"If you ever doubted that small changes can make a big difference, this excellent and insightful book will change your mind."—-Dan Ariely, Duke professor and bestselling author of Predictably Irrational, The Upside of Irrationality, and The (Honest) Truth About Dishonesty

"Martin, Goldstein, and Cialdini - the dream team of persuasion science - have written an utterly compelling and eminently useful book. In a series of short, crisp chapters, they explain the latest research from around the world - and then use that research to offer an array of practical, actionable techniques to influence the behavior of others. In every way, this book is a tour de force...This might be the first book I've read in which the passages I underlined outnumbered the passages I didn't."—- Daniel Pink, bestselling author of TO SELL IS HUMAN and DRIVE

"A charming collection of useful articles on increasing your oddsof getting agreement."—Arizona Daily Star - Best Book of the Month