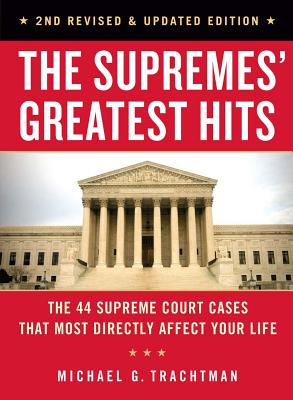 Can the government seize your house to build a shopping mall? Can it determine what control you have over your own body? Can police search your cellphone? The answers to those questions come from the Supreme Court, whose rulings have shaped American life and justice and allowed Americans to retain basic freedoms such as privacy, free speech, and the right to a fair trial. Especially relevant in light of Justice Antonin Scalia's passing, as President Obama gears for a fight over nominating his successor, and as we prepare to elect a new president who may get to appoint other justices, the revised and updated edition of Michael G. Trachtman's page-turner includes ten important new cases from 2010 to 2015. In addition, a special section features analyses of the new term rulings planned for June 2016. The new cases include:
Citizens United v. Federal Election Commission (2010), which restricts the right of governments to limit campaign contributions by corporations and unions; Burwell v. Hobby Lobby (2014), which allows a religious exemption from the Affordable Care Act requirement that corporations pay for contraceptive coverage for their employees; Riley v. California (2014), which ruled that police need warrants to search the cellphones of people they arrest; and Obergefell v. Hodges (2015), which ruled that the Constitution guarantees a right to same-sex marriage.

Michael G. Trachtman is a founder and president of Powell, Trachtman, Logan, Carrle & Lombardo, P.C., a litigation and business practice law firm located in suburban Philadelphia. He is the author of The Four Mistakes (Sterling), and What Every Executive Better Know About the Law (Simon & Schuster). He has written numerous articles published by business and professional organizations, he has been featured on radio and television programs throughout the country, and he is a frequent speaker on the intersections between law and business. Mr. Trachtman also serves as an adjunct professor at the Villanova University School of Law. He lives with his wife in Chester County, PA.