Fool's Gold: The Inside Story of J.P. Morgan and How Wall St. Greed Corrupted Its Bold Dream and Created a Financial Catastrophe (Paperback) 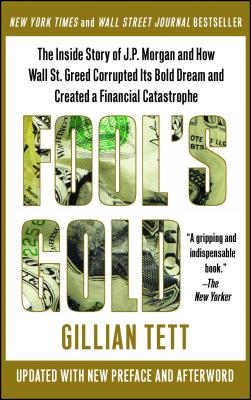 From award-winning Financial Times journalist Gillian Tett, who enraged Wall Street leaders with her news-breaking warnings of a crisis more than a year ahead of the curve, Fool’s Gold tells the astonishing unknown story at the heart of the 2008 meltdown.

Drawing on exclusive access to J.P. Morgan CEO Jamie Dimon and a tightly bonded team of bankers known on Wall Street as the “Morgan Mafia,” as well as in-depth interviews with dozens of other key players, including Treasury Secretary Timothy Geithner, Tett brings to life in gripping detail how the Morgan team’s bold ideas for a whole new kind of financial alchemy helped to ignite a revolution in banking, and how that revolution escalated wildly out of control.

The deeply reported and lively narrative takes readers behind the scenes, to the inner sanctums of elite finance and to the secretive reaches of what came to be known as the “shadow banking” world. The story begins with the intense Morgan brainstorming session in 1994 beside a pool in Boca Raton, where the team cooked up a dazzling new idea for the exotic financial product known as credit derivatives. That idea would rip around the banking world, catapult Morgan to the top of the turbocharged derivatives trade, and fuel an extraordinary banking boom that seemed to have unleashed banks from ages-old constraints of risk.

But when the Morgan team’s derivatives dream collided with the housing boom, and was perverted—through hubris, delusion, and sheer greed—by titans of banking that included Citigroup, UBS, Deutsche Bank, and the thundering herd at Merrill Lynch—even as J.P. Morgan itself stayed well away from the risky concoctions others were peddling—catastrophe followed. Tett’s access to Dimon and the J.P. Morgan leaders who so skillfully steered their bank away from the wild excesses of others sheds invaluable light not only on the untold story of how they engineered their bank’s escape from carnage but also on how possible it was for the larger banking world, regulators, and rating agencies to have spotted, and heeded, the terrible risks of a meltdown.

A tale of blistering brilliance and willfully blind ambition, Fool’s Gold is both a rare journey deep inside the arcane and wildly competitive world of high finance and a vital contribution to understanding how the worst economic crisis since the Great Depression was perpetrated.

Gillian Tett chairs the editorial board, US, for the Financial Times and writes columns for the world’s leading newspaper covering finance, business, and the political economy. She has been named British Journalist of the Year, Columnist of the Year, and Business Journalist of the Year in the UK and won two Society for Advancing Business Editing and Writing awards in the US. She speaks regularly at conferences around the world on finance and global markets and has a PhD in social anthropology from Cambridge University. Tett is the author of Saving the Sun: How Wall Street Mavericks Shook Up Japan’s Financial World and Made Billions, Fool’s Gold: The Inside Story of J.P. Morgan and How Wall St. Greed Corrupted Its Bold Dream and Created a Financial Catastrophe, and The Silo Effect: The Peril of Expertise and the Promise of Breaking Down Barriers.