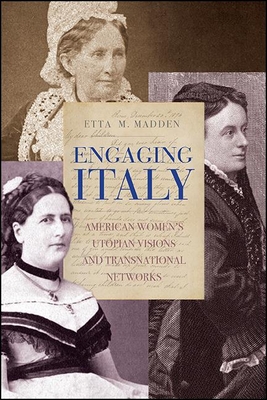 Engaging Italy charts the intertwined lives and writings of three American women in Italy in the 1860s and '70s--journalist Anne Hampton Brewster (1818-92), orphanage and industrial school founder Emily Bliss Gould (1825-75), and translator Caroline Crane Marsh (1816-1901). Brewster, Gould, and Marsh did not follow their callings abroad so much as they found them there. The political and religious unrest they encountered during Italian Unification put their utopian visions of expatriate life to the test. It also prompted these women to engage these changes and take up their pens both privately and publicly. Though little-known today, their diaries, letters, poetry, and news accounts help to rewrite the story of American women abroad inherited from figures such as Nathaniel Hawthorne, Mark Twain, and Henry James. Both feminist recovery project and collective biography, Engaging Italy contributes to the growing body of scholarship on transatlantic nineteenth-century women writers while focusing particular attention on the shared texts and ties linking Brewster, Gould, and Marsh. Etta M. Madden demonstrates the generative power of literary and social networks during moments of upheaval.

Etta M. Madden is Clif & Gail Smart Professor of English and Assistant Department Head at Missouri State University. As a recipient of a William J. Fulbright award, she served as a Senior Lecturer in American Literature at the University of Catania in Sicily. Her books include Eating in Eden: Food and American Utopias (coedited with Martha L. Finch); Bodies of Life: Shaker Literature and Literacies; and Selections from Eliza Leslie.