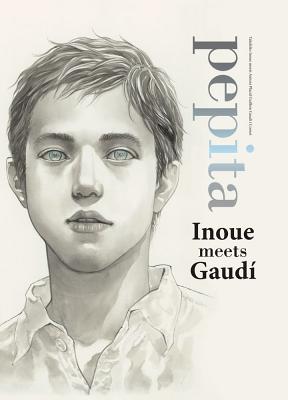 Half travel memoir, half art book, all beauty.

Antoni Gaudi was the world leader of Catalan modernist movement in architecture. Takehiko Inoue is one of the premier manga artists in the world. Inoue’s journey to Spain and to the world of Gaudi is half travel memoir, half art book, and all beauty.

Takehiko Inoue (Vagabond, Slam Dunk, Real) is one of Japan’s leading manga artists, and he has long been obsessed with the architecture of Antoni Gaudi. Pepita is a travel memoir about Inoue’s travels to Catalan, the people he meets, and the stunning architecture he experiences. It’s also an art book of the highest quality, constructed and framed by a leading practitioner of Japanese comics.

Takehiko Inoue is the creator of one of the most popular manga of all time, Slam Dunk, which has sold over 100 million copies worldwide. He followed that series up with two titles lauded by critics and fans alike— Vagabond, a fictional account of the life of Miyamoto Musashi, and Real, a manga about wheelchair basketball. Inoue is the recipient of numerous awards, including the prestigious Tezuka Osamu Cultural Prize and the Media Arts Festival Award. In addition to his work on manga, Inoue has worked on television commercials, character designs for video games, and is the founder of a scholarship to foster Japanese basketball talent.