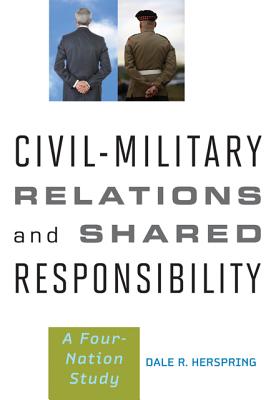 Dale R. Herspring considers the factors that allow some civilian and military organizations to operate more productively in a political context than others, bringing into comparative study for the first time the military organizations of the U.S., Russia, Germany, and Canada. Refuting the work of scholars such as Samuel P. Huntington and Michael C. Desch, Civil-Military Relations and Shared Responsibility approaches civil-military relations from a new angle, military culture, arguing that the optimal form of civil-military relations is one of shared responsibility between the two groups.

Herspring outlines eight factors that contribute to conditions that promote and support shared responsibility among civilian officials and the military, including such prerequisites as civilian leaders not interfering in the military's promotion process and civilian respect for military symbols and traditions. He uses these indicators in his comparative treatment of the U.S., Russian, German, and Canadian militaries.

Civilian authorities are always in charge and the decision on how to treat the military is a civilian decision. However, Herspring argues, failure by civilians to respect military culture will antagonize senior military officials, who will feel less free to express their views, thus depriving senior civilian officials, most of whom have no military experience, of the expert advice of those most capable of assessing the far-reaching forms of violence. This issue of civilian respect for military culture and operations plays out in Herspring's country case studies.

Dale R. Herspring is University Distinguished Professor in the Department of Political Science at Kansas State University. He is the author of numerous books, including Rumsfeld's Wars: The Arrogance of Power.