Flight of the Diamond Smugglers: A Tale of Pigeons, Obsession, and Greed Along Coastal South Africa (Paperback) 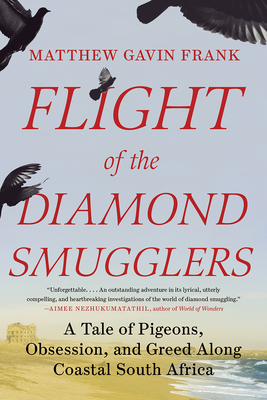 “Unforgettable. . . . An outstanding adventure in its lyrical, utterly compelling, and heartbreaking investigations of the world of diamond smuggling.” —Aimee Nezhukumatathil

For nearly eighty years, a huge portion of coastal South Africa was closed off to the public. With many of its pits now deemed “overmined” and abandoned, American journalist Matthew Gavin Frank sets out across the infamous Diamond Coast to investigate an illicit trade that supplies a global market. Immediately, he became intrigued by the ingenious methods used in facilitating smuggling particularly, the illegal act of sneaking carrier pigeons onto mine property, affixing diamonds to their feet, and sending them into the air.

Entering Die Sperrgebiet (“The Forbidden Zone”) is like entering an eerie ghost town, but Frank is surprised by the number of people willing—even eager—to talk with him. Soon he meets Msizi, a young diamond digger, and his pigeon, Bartholomew, who helps him steal diamonds. It’s a deadly game: pigeons are shot on sight by mine security, and Msizi knows of smugglers who have disappeared because of their crimes. For this, Msizi blames “Mr. Lester,” an evil tall-tale figure of mythic proportions.

From the mining towns of Alexander Bay and Port Nolloth, through the “halfway” desert, to Kleinzee’s shores littered with shipwrecks, Frank investigates a long overlooked story. Weaving interviews with local diamond miners who raise pigeons in secret with harrowing anecdotes from former heads of security, environmental managers, and vigilante pigeon hunters, Frank reveals how these feathered bandits became outlaws in every mining town.

Interwoven throughout this obsessive quest are epic legends in which pigeons and diamonds intersect, such as that of Krishna’s famed diamond Koh-i-Noor, the Mountain of Light, and that of the Cherokee serpent Uktena. In these strange connections, where truth forever tangles with the lore of centuries past, Frank is able to contextualize the personal grief that sent him, with his wife Louisa in the passenger seat, on this enlightening journey across parched lands.

Blending elements of reportage, memoir, and incantation, Flight of the Diamond Smugglers is a rare and remarkable portrait of exploitation and greed in one of the most dangerous areas of coastal South Africa. With his sovereign prose and insatiable curiosity, Matthew Gavin Frank “reminds us that the world is a place of wonder if only we look” (Toby Muse).

Matthew Gavin Frank is the author of Preparing the Ghost and The Mad Feast. He teaches creative writing and lives in Marquette, Michigan.