Journey to the Edge of Reason: The Life of Kurt Gödel (Hardcover) 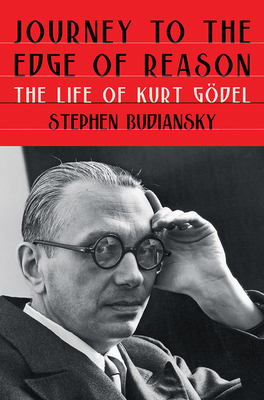 The first major biography written for a general audience of the logician and mathematician whose Incompleteness Theorems helped launch a modern scientific revolution.

Nearly a hundred years after its publication, Kurt Gödel’s famous proof that every mathematical system must contain propositions that are true—yet never provable—continues to unsettle mathematics, philosophy, and computer science. Yet unlike Einstein, with whom he formed a warm and abiding friendship, Gödel has long escaped all but the most casual scrutiny of his life.

Stephen Budiansky’s Journey to the Edge of Reason is the first biography to fully draw upon Gödel’s voluminous letters and writings—including a never-before-transcribed shorthand diary of his most intimate thoughts—to explore Gödel’s profound intellectual friendships, his moving relationship with his mother, his troubled yet devoted marriage, and the debilitating bouts of paranoia that ultimately took his life. It also offers an intimate portrait of the scientific and intellectual circles in prewar Vienna, a haunting account of Gödel’s and Jewish intellectuals’ flight from Austria and Germany at the start of the Second World War, and a vivid re-creation of the early days of the Institute for Advanced Study in Princeton, NJ, where Gödel and Einstein both worked.

Eloquent and insightful, Journey to the Edge of Reason is a fully realized portrait of the odd, brilliant, and tormented man who has been called the greatest logician since Aristotle, and illuminates the far-reaching implications of Gödel’s revolutionary ideas for philosophy, mathematics, artificial intelligence, and man’s place in the cosmos.

Stephen Budiansky is a historian, biographer, and journalist whose writing has appeared in the Atlantic, New York Times, Wall Street Journal, and Washington Post. A recipient of the Guggenheim Fellowship, he resides in Loudoun County, Virginia.

Mesmerizing.... As this vibrant biography so beautifully elucidates, the truth of a life can’t ever be proven; it can only be shown.
— Jennifer Szalai - New York Times Book Review

Journey to the Edge of Reason is an intimate and haunting portrait of one of the most elusive gods on Princeton’s Mt. Olympus. A triumph of research and a wonderful read.

Kurt Gödel’s mathematical results on incompleteness and undecidable propositions leave it up to us, as individuals, to choose whether to mourn these limits to the power of formal systems, or celebrate his proof that even the most rigid numerical bureaucracy contains the tools by which higher truth will always be able to effect an escape. Stephen Budiansky’s Journey to the Edge of Reason expertly and humanely frames these results between Gödel’s childhood under the dark shadow of the Austrian and Nazi bureaucracies, his escape to America, his descent into physical and mental illness, and his achievement of a reconciliation between spiritual faith and scientific proof.

Expansive ... places [Gödel’s] achievements in their social and political context.
— The New Yorker

A painstakingly researched and lucidly presented biography—a close-up of one of the most influential and enigmatic thinkers of the twentieth century—full of vivid detail and sharp historical insight.
— Karl Sigmund, professor of mathematics, University of Vienna, and author of Exact Thinking in Demented Times

A brilliant biography of one of the most original thinkers of all time, Journey to the Edge of Reason is as deep and precise as the genius it describes. In a paradox befitting Gödel himself, it takes a tale of logic and its limits and finds, at its heart, something strangely soulful and sympathetic.

Terrific.... An outstanding biography of a man of incomprehensible brilliance.
— Kirkus, starred review

Gödel comes through as a brilliant though tragic figure in Budiansky’s richly descriptive prose. This captivating portrait of a great if neurotic mind hits the mark.
— Publishers Weekly, starred review

Budiansky exposes the social and political influences that shaped the
life of this brilliant Austrian mathematician.... But Budiansky’s greater
accomplishment is that of penetrating a mind that reoriented the entire
mathematical world.... A portrait remarkable for both its intellectual depth
and for its compassion.
— Booklist, starred review

Remarkable.... A singular virtue of this well-researched and
well-written book is that Budiansky takes his subject’s life as seriously as
his mathematical work.... Readers shouldn’t be discouraged by the complexity
of Go¨del’s mathematics; this is the first major biography of the brilliant yet
tragic figure and, in all respects, a first-rate one.
— Library Journal, starred review