Pegasus: How a Spy in Your Pocket Threatens the End of Privacy, Dignity, and Democracy (Hardcover) 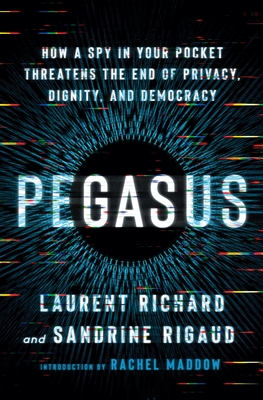 Laurent Richard and Sandrine Rigaud's Pegasus: How a Spy in Our Pocket Threatens the End of Privacy, Dignity, and Democracy is the story of the one of the most sophisticated and invasive surveillance weapons ever created, used by governments around the world.

Pegasus is widely regarded as the most effective and sought-after cyber-surveillance system on the market. The system’s creator, the NSO Group, a private corporation headquartered in Israel, is not shy about proclaiming its ability to thwart terrorists and criminals. “Thousands of people in Europe owe their lives to hundreds of our company employees,” NSO’s cofounder declared in 2019. This bold assertion may be true, at least in part, but it’s by no means the whole story.

NSO’s Pegasus system has not been limited to catching bad guys. It’s also been used to spy on hundreds, and maybe thousands, of innocent people around the world: heads of state, diplomats, human rights defenders, political opponents, and journalists.

This spyware is as insidious as it is invasive, capable of infecting a private cell phone without alerting the owner, and of doing its work in the background, in silence, virtually undetectable. Pegasus can track a person’s daily movement in real time, gain control of the device’s microphones and cameras at will, and capture all videos, photos, emails, texts, and passwords—encrypted or not. This data can be exfiltrated, stored on outside servers, and then leveraged to blackmail, intimidate, and silence the victims. Its full reach is not yet known. “If they’ve found a way to hack one iPhone,” says Edward Snowden, “they’ve found a way to hack all iPhones.”

Pegasus is a look inside the monthslong worldwide investigation, triggered by a single spectacular leak of data, and a look at how an international consortium of reporters and editors revealed that cyber intrusion and cyber surveillance are happening with exponentially increasing frequency across the globe, at a scale that astounds.

Meticulously reported and masterfully written, Pegasus shines a light on the lives that have been turned upside down by this unprecedented threat and exposes the chilling new ways authoritarian regimes are eroding key pillars of democracy: privacy, freedom of the press, and freedom of speech.

Laurent Richard is a Paris-based award-winning documentary filmmaker who was named the 2018 European Journalist of the Year at the Prix Europa in Berlin. He is the founder of Forbidden Stories, a network of investigative journalists devoted continuing the unfinished work of murdered reporters to ensure the work they died for is not buried with them.

For more than twenty years Laurent Richard has been conducting major stories for television. He is the author of numerous investigations into the lies of the tobacco industry, the excesses of the financial sector, and the clandestine actions of Mossad and the CIA.

Since its creation, Forbidden Stories has received numerous awards, including a prestigious European Press Prize, two George Polk Awards, and a RSF Impact Prize for the Pegasus Project, published in 2021.

Sandrine Rigaud is a French investigative journalist. As editor of Forbidden Stories since 2019, she coordinated the award-winning Pegasus Project and the Cartel Project, an international investigation of assassinated Mexican journalists. Before joining Forbidden Stories, she directed feature-length documentaries for French television. She has reported from Tanzania, Uzbekistan, Lebanon, Qatar, and Bangladesh.

“Pegasus is an alarming and urgent book—an engrossing thriller about cybersurveillance software so sly and powerful that it can take over your cell phone without your knowledge. This is terrifying stuff. Richard and Rigaud reveal how authoritarian regimes can use Pegasus software to spy on dissidents, human rights activists, journalists—and virtually anyone with a mobile phone.”
—David Zucchino, Pulitzer Prize-winning author of Wilmington’s Lie

“Paced like a thriller, Pegasus reveals a manifested dystopia where repressive governments purchase digital bolt-cutters to break into the phones of their critics and adversaries. But it also details the power of investigative journalists to expose a 21st-century arms market whose wares are aimed at civil society.”
—Spencer Ackerman, Pulitzer Prize-winning journalist and author of Reign of Terror